The Undefeated San Francisco 49ers Have Traded For Emmanuel Sanders 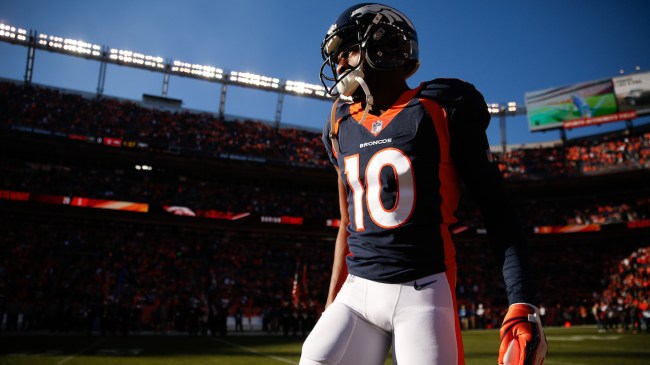 The San Fransisco 49ers — who are currently one of the biggest surprises of the NFL season as they are one of two undefeated teams and sit atop the NFC West at 6-0 — have made a move to improve their offense, as they have traded for Denver Broncos wide receiver Emmanuel Sanders.

According to ESPN’s Adam Schefter, in exchange for the 32-year-old Sanders, the 49ers will send a 2020 3rd round pick and a 2020 fourth-round pick to the Denver Broncos. In addition to Sanders, the Broncos also sent the 49ers a fifth-round 2020 NFL Draft pick.

Denver is dealing WR Emmanuel Sanders and a 2020 5th-round pick to San Francisco in exchange for 2020 3rd- and 4th-round picks, per league sources.

Over the course of his career, Sanders has been one of the NFL’s most quietly productive wideouts, as he’s averaged 113 targets per season since 2012.

The 49ers are hoping that Sanders will enhance their Jimmy Garoppolo-helmed passing attack, which currently ranks 25th in the National Football League in terms of passing yards per game.

The San Fransisco 49ers will be the third time that Sanders has played for, having previously played with the Pittsburgh Steelers prior to his tenure in the Mile High City.

At this time, it is unclear if Sanders will make his San Fransisco debut this weekend when the 49ers host the streaking Carolina Panthers, who have won four straight games under second-year quarterback Kyle Allen.