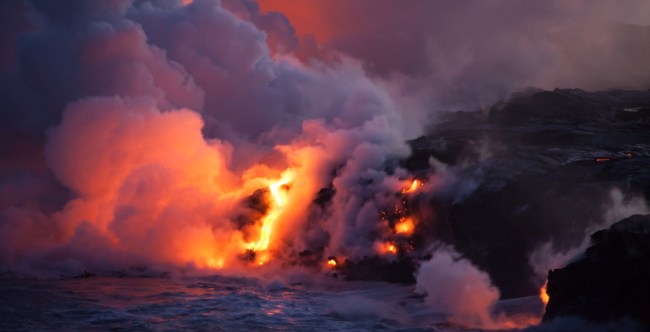 Science can be scary sometimes. The people who work in that field are always finding new things that can kill us, or at the very least scare the crap out of us. Aliens, cloned monkeys, zombies, underwater supervolcanoes.

A research paper published in Nature Scientific Reports states a lava dome is expanding within the Kikai Caldera. This is just 31 miles south of Kyushu — Japan’s most southerly main island.

The dome itself is 5.9 miles wide. The seabed has been forced upwards some 2,001 feet by more than 31 cubic kilometers of lava. Its peak sits just 98 feet beneath the ocean waves.

But the dome is not in itself a problem. It’s what it represents. It means a vastly bigger crucible of magma below has begun building up pressure once again.

Professor Yoshiyuki Tatsumi, head of the Kobe Ocean-Bottom Exploration Center (KOBEC) and a magma specialist, tried (and failed) to reassure us, “Although the probability of a gigantic caldera eruption hitting the Japanese archipelago is 1 percent in the next 100 years, it is estimated that the death toll could rise to approximately 100 million in the worst case scenario.”

That’s because, as Kobe University puts it, “An eruption like this would see over 40 cubic kilometers of magma released in one burst, causing enormous damage.”

Meanwhile in America, a different supervolcano located inside Yellowstone National Park could send more than 1,000 cubic kilometers of rock and ash flying at once, according to Travel + Leisure.

Should it erupt, it “could spew ash across most of the continental U.S., sending Earth into a volcanic winter.”