Sgt. Maj. John L. Canley Awarded Medal Of Honor For Heroism That Saved Marines In Vietnam, His Story Is A Must-Read 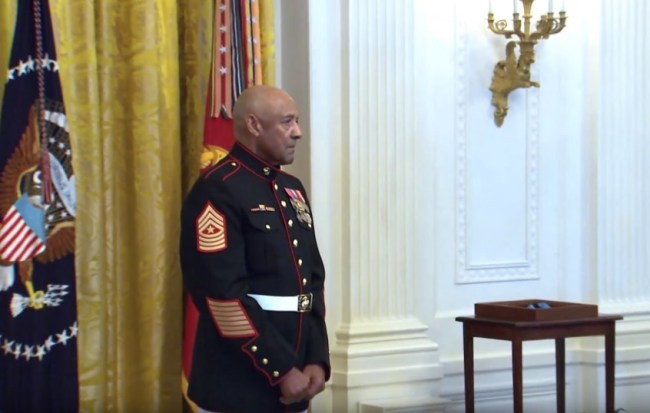 It’s been 50 years since John L. Canley valiantly led his company in a fierce battle during the Vietnam War, but the nation has not forgot all that he did for the country. On Wednesday, Sgt. Maj. John L. Canley was awarded the Medal of Honor for his valor that he displayed during the Battle of Hue City that saved the lives of many Marines. Canley’s story of gallantry sounds straight out of an action hero movie, but the unparalleled actions of this man are real and are nothing short of extraordinary.

Fifty years after his heroism during the Vietnam War, retired Marine Sgt. Maj. John L. Canley receives the Medal of Honor from President Donald Trump in a ceremony at the White House.

He is the 300th Marine to receive the nation's highest award for valor https://t.co/t5WQDZW8kQ pic.twitter.com/Fy7yaFeY2a

As Canley was given the award, shouts of the Marine Corps battle cry “oorah” erupted in the East Room by Canley’s fellow Vietnam veterans and other military members. “In one instance after another, John risked his own life to save his Marines,” President Trump said of the military hero. “He just continued to face the enemy with no regard for his own life.” He is “a Marine warrior, who is bigger than life and beyond the reach of death. He is truly larger than life,” Trump said of Canley. “There are very few people — brave, brave people — like you, John.”

Sgt. Maj. John L. Canley heroically saved the lives of many fellow Marines in what was one of the bloodiest battles of the Vietnam War. In 1968, Canley was deployed to Vietnam and served as Gunnery Sergeant with Alpha Company, First Battalion, First Marines. On January 30, 1968, the Viet Cong and North Vietnamese Army launched the Tet Offensive, the surprise campaign that launched attacks against military command centers and cities in South Vietnam. Canley’s company was ordered to the South Vietnam town of Hue City, where they would attempt to save fellow American forces who were surrounded by the Viet Cong.

During the Battle of Hue City, Canley led the charge in a weeklong offensive to retake the city. Canley, who is known as a “Marine’s Marine,” fearlessly marched into enemy territory to overwhelm the enemy but also rescued wounded Americans and brought them to safety. While serving in Vietnam, Canley was wounded multiple times during fierce fighting, but it wouldn’t stop him from taking it straight to the enemy. On one occasion, a Marine had been seriously injured by a rocket and was about to be run over by a tank so Canley ran into the line of fire to save the helpless soldier.

Despite not being a commissioned officer, the then 30-year-old Canley confidently took over the command of the Company A after his commander was severely wounded during the ferocious battle. Canley not only orchestrated the strategy of the successful offensive but also led his troops into battle. On February 6th, Canley risked his life not once, but twice when he scaled a wall that put him in full view of the enemy to pick up and carry injured Marines back to safety.

On Wednesday, retired Marine Sgt. Maj. John L. Canley will receive the Medal of Honor. It is an upgrade to the Navy Cross he received in 1970. Read more: https://t.co/S85CE4hqkx (@USMC video) pic.twitter.com/Nlwlwy51aB

Sergeant Major Canley and his men captured an enemy-occupied building in Hue. Then Canley utilized the building’s vantage point to drop an explosive, neutralizing several enemy combatants and injuring many more, forcing the enemy to retreat. Canley took control of a school that had been occupied by the North Vietnamese by engaging in a suicide mission where he charged the fortification that was defended with soldiers armed with machine guns with rocket launchers. Canley’s company took over several important buildings in Hue City.

“In the days that followed, John led his company through the fog and rain, and in house-to-house, very vicious, very hard combat,” President Trump said. “He assaulted enemy strongholds, killed enemy fighters, and with deadly accuracy, did everything you had to do.”

“He wasn’t one of these gruff, screaming guys. You did stuff for him because you didn’t want to disappoint him,” former Marine Corps Pfc. John Ligato, who served alongside Canley told Military.com in July. “You followed him because he was a true leader – something you need in life-and-death situations. … He was totally fearless. He loved his Marines, and we loved him back.”

The Medal of Honor “means a lot to me,” Canley said in an interview with USA Today. “Mostly for my Marines, because we’ve had to wait 50-plus years to get any kind of recognition. It’s not about me. It’s about the Marines who didn’t [receive] the appropriate recognition when we got home.”

“My Marines because they believed in me, they would follow me to death,” Canley said. “And I have no doubt about that.”

“I can’t think of any place I’d rather die than with my Marines on the battlefield.” — Sgt. Maj. John Canley, soon-to-be the 300th Marine awarded the Medal of Honor

Watch him be awarded at the @WhiteHouse live here or on our Facebook tomorrow at 4:30 P.M. pic.twitter.com/tWmix7xdsJ

Canley was born in Caledonia, Arkansas, and at the age of 15 wanted to join the military so badly that he stole his older brother’s paperwork to enlist in the Marines. In 1970, Canley was awarded the Navy Cross, the nation’s second highest military honor. Canley also earned two Bronze Stars, the Purple Heart, and the Navy and Marine Corps Commendation Medal for his service in Vietnam between 1964 and 1970. He retired in 1981 as a sergeant major after serving 28 years in the Marine Corps.

Learn more about the newest recipient of the Medal of Honor, retired Marine Sgt. Maj. John L. Canley, and his heroism during the Vietnam War: https://t.co/48SfMX3fUg pic.twitter.com/JPSrUCraub

.@USMC Maj. John Canley earned the #NavyCross in 1970 for his lifesaving actions during the #VietnamWar, but he’s finally getting the real credit he deserves: the #MedalofHonor. #KnowYourMil #MoHMonday
Read More: https://t.co/gTQyRxEZ5q pic.twitter.com/p5dBVKDhah

Thank you Sergeant Major John Canley for your service to our nation. It was an honor to have you & your family at the @WhiteHouse to receive the #MedalofHonor for your heroic actions & leadership under enemy fire.

Marine Corps Sgt. Maj. John L. Canley might be retired, but he is still an imposing figure even at the age of 80-years-old. “I asked him that question; I said, ‘How are you keeping in shape?’” President Trump asked and Sergeant Major Canley replied, “I still work out, sir.” Canley even works out with his fellow (much, much younger) Marines.

SgtMaj Canley visited the warriors at Weapons Training Battalion and put some rounds down range. The weapons may change but the fundamentals remain the same. Great shooting SgtMaj. Semper Fi-“18” pic.twitter.com/LhhJ1A9PwI