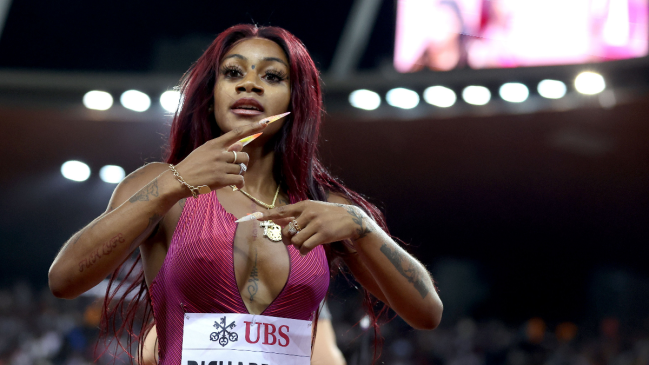 The American women’s track star that was very briefly on top of the world prior to the Tokyo Olympics before everything came crashing down?

Yeah, well she’s back in the news again on Saturday and it’s yet again for reasons she probably wishes it weren’t.

Richardson, a 22-year-old, won the NCAA championship in the 100-meter dash as freshman for LSU in 2019. Four days later, she announced that she was going pro.

She then entered the 2020 US Olympic Trials as a budding superstar and the favorite to win the 100. She took the top spot at trials, winning the race by over one-tenth of a second. But a failed drug test which returned positive for THC led to her disqualification from the event and eventual suspension.

Richardson could have been selected for the US 4×100 relay team for the Tokyo Olympics, but was left out altogether. She returned following the Olympics and immediately came under for for disrespecting her Jamaican opponents, who then went out and beat her handily.

Since that time, Richardson has struggled to return to the heights she once seemed destined for. She’s also landed back in the news over a number of various controversies. The latest of those controversies came over the weekend.

Richardson made more headlines on Saturday with an Instagram post showing her being removed from an American Airlines flight after a dispute with a flight attendant.

“Prior to the video this gentleman asked me to get off a cell phone call, I did,” Richardson captioned one of her videos. “I stated to him I didn’t like the tone he used with me. Following that while standing in front of me doing the safety protocols he continued to lean over to look at my phone. He asked to see that my phones were in airplane more at this point. He demanded that me show him. Which I did in front of him.”- via The New York Post

Richardson stated that she was flying as part of a vacation. The post does not show what the attendant initially said to begin the exchange.

Passengers then told Richardson to stop arguing with the attendant. One passenger even blamed her for causing him to miss a connection.

She was eventually removed from the plane to the applause of the remaining passengers. It’s just the latest twitter in what has been a whirlwind couple of years for the enigmatic sprinter.