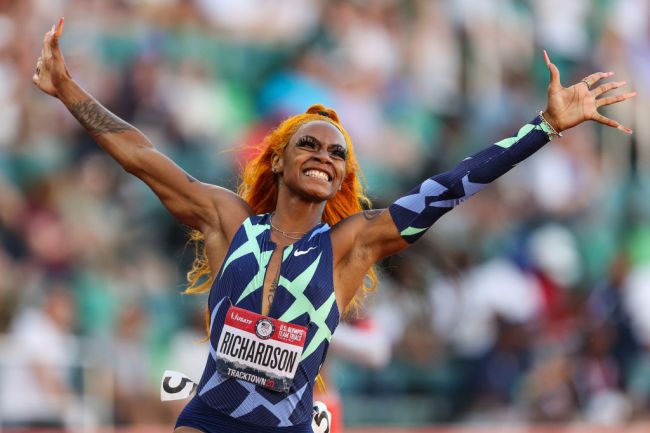 The fastest woman in America is making her return to the track this weekend and has put her opponents on notice. Sha’Carri Richardson will run at the Diamond League Prefontaine Classic on Saturday and is set to face international competition for the first time since her suspension.

Richardson, who is only 21, ingested marijuana after finding out that her biological mother passed away prior to the Olympic Trials. As a result, she was suspended 30 days for a positive post-Trials drug test. She was then (wrongly) passed over by USA Track & Field for the Olympic team.

Shockingly, the usage of cannabis did not hinder her Olympic Trial performance. She absolutely dusted her American competition. Richardson won her qualifying heat by a landslide with one shoe untied and cruised to the top spot in her semifinal and final.

Despite her dominate performance, because she smoked a little weed, Richardson missed out on her first Olympic appearance. Now, 51 days later, she is back.

As only Richardson can, she announced her return in style.

Known for her colorful hair and long nails, nobody on the track looks like Richardson when she runs. She debuted her new look on TikTok and took the opportunity to talk a little talk.

Richardson will race for the first time since the Trials at The Prefontaine Classic in Eugene, Oregon on Saturday.

With Richardson absent in Tokyo, the Jamaican trio of Elaine Thompson-Herah, Shelly-Ann Fraser-Pryce and Shericka Jackson took all three spots on the podium in the 100-meter race. The three medalists will run alongside Richardson on Saturday.

The stacked field sets up a do-over for the Olympic final that everyone expected before the suspension.

With hopes of catching the Olympic gold medalist, Richardson enters the Prefontaine Classic as the third fastest woman in 2021 and sixth fastest woman in history. She has lined up against Fraser-Pryce twice in her career, winning both races, but Saturday will mark Richardson’s first time racing Thompson-Herah.

Though not her specialty, Richardson will also run the 200-meter against a stacked field.

The Prefontaine Classic begins Friday with coverage available on USATF.TV. Saturday’s competition will be live on Peacock at 4:00pm ET and on NBC beginning at 4:30pm ET. If Richardson goes out and wins, Thompson-Herah has to hand over the gold medal… that’s how this works, right?