Are Sharks More Attracted To Human Or Fish Blood? YouTuber Uses A Bucket Of Blood To Find Out 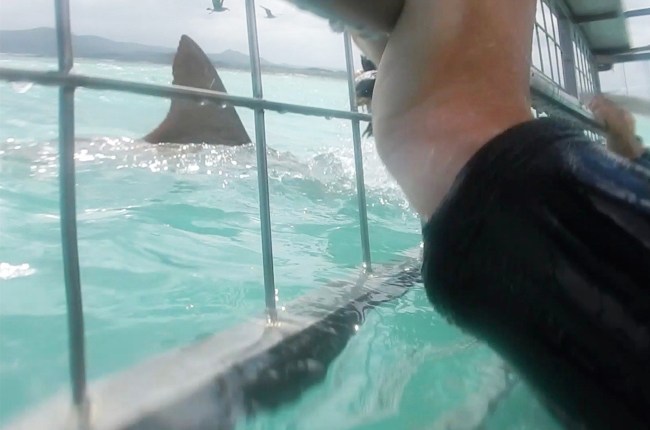 Fish blood. Sharks love fish blood. Millions of years of evolution have led sharks to become absolutely intoxicated by the scent of fish blood. With that said, sharks really do love all blood.

One of the realest shark encounters I’ve ever had was down at the Staniel Cay Yacht Club in The Exumas (The Bahamas). If you’ve ever been there then you’ve seen the 50 or so sharks that hang around the dock 24/7/365 waiting for an easy meal when the fisherman come back and throw their fish scraps in the water.

I was down there on vacation with a friend’s family back in college and we were swimming behind the yacht parked on the dock. I must’ve scraped my knee when I jumped in the water because as we were holding the back of the boat in the strong current we noticed all of the sharks had come off the bottom and were swimming near the surface not too far behind us. That’s when I noticed my knee was scraped up and because I’d been drinking every day for like two weeks my thin blood was pouring into the water and the sharks were VERY interested.

The question here though is if sharks are more interested in fish blood or mammal blood. For this test, YouTuber Mark Rober uses cow’s blood but assures us all mammal blood smells the same to sharks. As I mentioned at the beginning of this article, sharks go WILD for fish blood. But the experiment is pretty illuminating:

There’s an awesome feeding frenzy as the end of this video but it is quite long so here’s the recap from Mashable on what Mark Rober found in this experiment:

“Alongside marine biologist Luke Tipple, Rober heads to the Bahamas and uses a controlled experiment with three anchored surfboards to release the different blood types into the water in the same area but distanced from each other. They also release odorless seawater in the same way to test whether the surfboards themselves are targets of the sharks. Then they sit back with their filming drones and wait for the toothy beasts to show up.

The TL:DW version? Fish blood is way more attractive to sharks than mammal blood.”
(via Mashable)

There’s absolutely no reason that sharks would be more attracted to mammal blood than fish blood. If that was the case then sharks would actively seek out mammals to feed on when we know that’s not the case. Fatal shark attacks on humans are insanely rare when there are probably a few million sharks worldwide eating fish right now as I type out this sentence.

By the way, it is Shark Week. It kicked off on Sunday, August 9th. So if you’re into that you should tune in to the Discovery Channel all week for coverage.