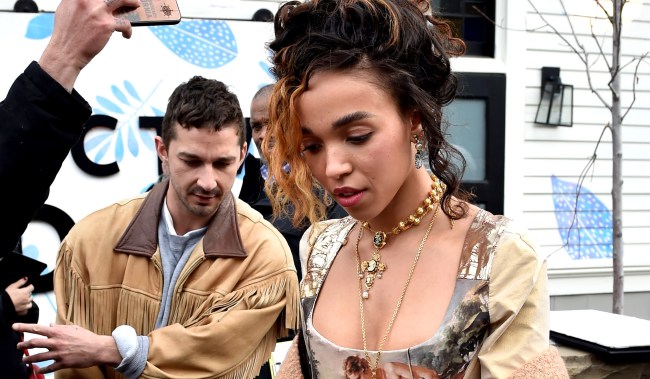 Actor Shia LaBeouf is back in the news again, and as has been so often the case with him, it’s not good news.

The 34-year-old LaBeouf is now the subject of a lawsuit filed by his ex-girlfiend FKA Twigs for alleged “relentless” physical abuse, including sexual battery, assault, infliction of emotional distress, and giving her an STD.

Among the numerous claims made by the 32-year-old FKA Twigs, real name Tahliah Debrett Barnett, and detailed in a blisering New York Times report published on Friday, are incidents where LaBeouf allegedly slammed her against a car, attempted to strangle her, and knowingly gave her an STD.

She also claims LaBeouf had rules about how many times a day she had to kiss and touch him, wouldn’t let her wear clothing to bed, would drive recklessly, threatening to crash the car if she didn’t profess her love for him, brandished a gun and claimed he’d killed stray dogs because he wanted to know what it felt like to take a life, and would sleep with guns because he believed gang members were out to get him.

“The whole time I was with him, I could have bought myself a business-flight plane ticket back to my four-story townhouse in Hackney,” Twigs says in the suit. “He brought me so low, below myself, that the idea of leaving him and having to work myself back up just seemed impossible.”

Twigs says she isn’t suing LaBeouf for the money (the amount which was undisclosed and much of which will go to domestic violence charities), but because “I’d like to be able to raise awareness on the tactics that abusers use to control you and take away your agency.”

A second former girlfriend of LaBeouf’s, Karolyn Pho, has also accused him of abusive behavior, some of which is detailed in the lawsuit, including an alleged incident where the actor drunkenly pinned her to a bed and head-butted her hard enough that she was bleeding.

She also stated that LaBeouf did not like it if she spoke to or looked at male waiters, something that Twigs also claimed.

“I’m not in any position to tell anyone how my behavior made them feel,” LaBeouf wrote in an email to New York Times. “I have no excuses for my alcoholism or aggression, only rationalizations. I have been abusive to myself and everyone around me for years. I have a history of hurting the people closest to me. I’m ashamed of that history and am sorry to those I hurt. There is nothing else I can really say.”

LaBeouf also wrote in a separate email, “Although many of these allegations are not true. I am not in the position to defend any of my actions. I owe these women the opportunity to air their statements publicly and accept accountability for those thing I have done. As someone in recovery, I have to face almost daily reminders of things I did say and do when I was drinking.

“It has always been easy for me to accept responsibility when my behavior reflects poorly on myself, but it’s much harder to accept the knowledge that I may have caused great pain to others. I can’t rewrite history. I can only accept it and work to be better in the future. I write this as a sober member of a twelve-step program and in therapy for my many failings.”

LaBeouf added, “I am not cured of my PTSD and alcoholism, but I am committed to doing what I need to do to recover, and I will forever be sorry to the people that I may have harmed along the way.”

Unfortunately, this is not the first time the actor has been accused of abuse by a girlfriend. In 2015, he was recorded arguing with then girlfriend Mia Goth and admitted on video after leaving the scene of the argument, “If I’d have stayed there, I would’ve killed her.”