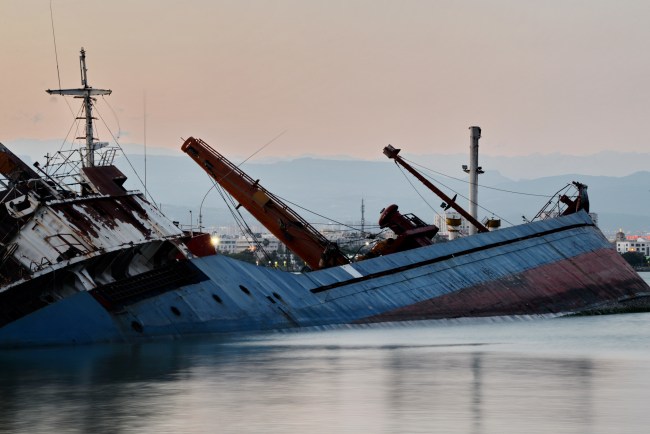 Until today I had never seen a MASSIVE boat sink into the ocean but I always assumed it was an ordeal that would take longer than a minute, and I was wrong.

Earlier this week, the 180-foot Voici Bernadette freighter was sunk in 100-feet of water in St. Lucie County, Florida off the coast of Fort Pierce. The 180-foot vessel was sent to Davy Jones’ Locker in order to create Florida’s newest artificial coral reef.

The idea here is the boat will sink to the bottom and over the course of the next several years, fish and other marine life will find this structure and make it their new home and life will begin to flourish. You can find artificial reefs like this strewn throughout the Gulf of Mexico and the Caribbean.

When the 180-foot Voici Bernadette was sent to the bottom of the ocean on Monday over 200 local boaters showed up to watch the freighter be sunk and that led to some pretty badass footage. I had no idea that a ship of that size could go under so damn quickly with being blown to smithereens. Check it out:

According to VeroNews.com, the Voici Bernadette is a freighter which had sailed under the flags of multiple nations throughout the years but it came to rest in the hands of U.S. Customs and Border Protection after it was discovered to be smuggling drugs.

I’d say that this is a pretty awesome use of a confiscated ship. Within the next few years, this will be a SICK fishing spot off the coast of Fort Pierce for catching Grouper and Snapper.

Hopefully, the lionfish and goliath grouper don’t take it over before the other fish and coral have a chance to thrive.