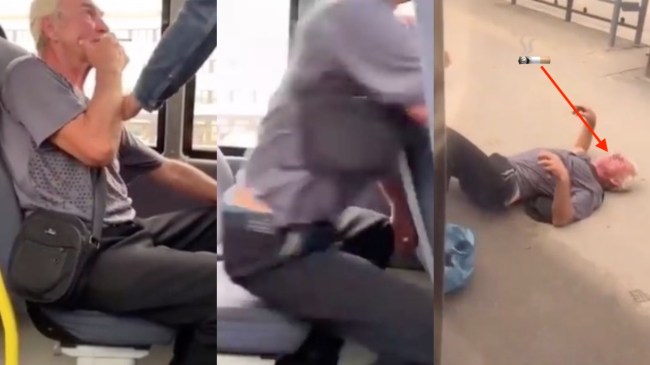 At a certain age, I imagine old people just assume they can get away with almost anything and just let it fly.

Pissing in his pants? Well, that comes with age, please forgive him.

Ripping a heater on public transpo? Nah, fuck that — apparently, that’s where society has decided to draw the line.

In a video posted to the “Humans of Bankstown” Facebook page (an Australian ripoff of Humans of New York) on Wednesday, July 31, a purse-carrying old guy can be seen casually taking puffs of his cigarette while onboard a public bus.

Likely assuming that nobody would dare cross the imaginary peace treaty that middle-aged people signed with elderly people long ago, my man — let’s call him George, that’s a solid old man name — my man George here smoked his cigarette with the confidence of a supervillain. And folks, let me tell ya… George was wrong.

Without even uttering a word, the hand of an off-camera man darts into the frame, grabbing George by the strap of his bag. In one swift motion — in something that looks like it’s out of a movie — the health-crazed assailant drags George clean off the bus, quite literally tossing him to the curb.

George — not to be deterred, that stubborn old bastard — keeps his cigarette lit and intact throughout the entire ordeal, even continuing to rip his heater as he’s laying face-up on the pavement. That is a man who is committed to ripping heaters — whether it be sitting upright on a bus or on his ass on the sidewalk — and for that, we have to respect him.

Live your life to the fullest, our dear George, while you still can.