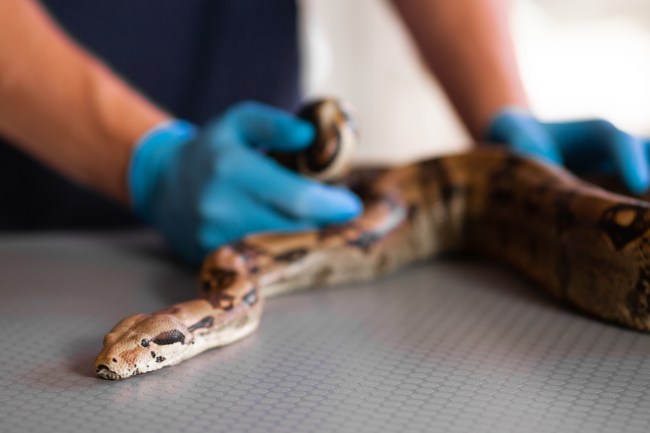 Snakes are carnivores and devour other animals such as rabbits, birds, frogs, fish, all in one mighty swallow. Apparently, they also enjoy eating beach towels on occasion.

Veterinarians at the Small Animal and Specialist Hospital (SASH) in Sydney found that Monty had eaten the towel. That had to be drier than your mom’s… meatloaf.

The vets were tasked with the unlucky job of attempting to extract the beach towel from the stomach of the 9-foot-long snake. What in the Mike Rowe Dirty Jobs is this about?

“Monty was anesthetized and radiographs were taken to confirm the location of the start of the towel,” the animal hospital wrote on their Facebook. “A flexible endoscope was placed down Monty’s gastrointestinal tract, which allowed us to visualize the end of the towel sitting in her stomach.”

“Do I have something in my teeth?”

I don’t know who needs to hear this, but, towels aren’t food. hey Monty, maybe chill with the eating towels thing, you’re going to get towels banned the same way that turtles got straws banned. And paper bath towels are not going to cut it.

“With assistance from our internal medicine team, very long forceps were placed through the endoscope and used to grasp the towel,” the Facebook post read. “Once we had a good grip, the towel was able to be carefully removed from the gastrointestinal tract with endoscopic guidance.”

I feel like Monty missed a golden opportunity, one would surmise that you don’t need to wipe after crapping out an entire beach towel AKA a towel movement.

“It was smiles all round and we’re happy to report that both Monty and the beach towel have lived to see another day,” they said. “Monty was discharged from hospital the same day and her owner reports she is back to her happy, hungry self.”

So why exactly did a snake eat a towel? Wait. Did Monty recently go on a cruise? And while on the cruise did she get tricked into eating a towel?