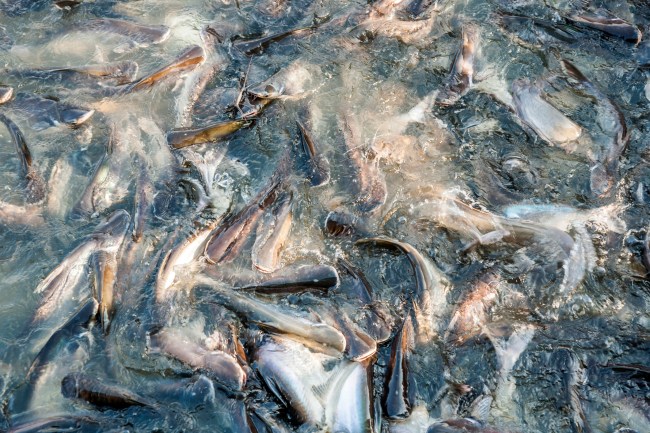 I’ve caught some strange things in my lifetime. I have reeled in big ass stingrays, sharks, boots, branches, blowfish, license plates, and everything in between. One thing I’ve never caught on a fishing trip is a snake.

A Houston angler has gone viral after footage surfaced of him reeling a catfish with a big ass snake wrapped around it and its fangs sunk into the fish. The snake wasn’t willing to let its easy meal go easily and it was holding on for dear life.

Angler Chase McCray was fishing in Langham Creek near Copperfield Place which is in Houston’s Harris County when all of this went down and people are going nuts for this footage, and rightfully so because nobody EVER expects to reel in a big ass snake when what you expected was a catfish on the other end.

the snake is me
the fish is me holding onto my hope that harry will drop hs2 soon—
the clownery… pic.twitter.com/HjjAEWipJn

As for the snake, he didn’t let go of the fish without a fight according to ABC7:

“I took the knife to get the snake off the fish and released the fish,” McCray explained. “The snake had a few wounds from the knife, but I released it as well.”

That’s some straight up insanity, isn’t it? It also reminded me of this clip that Josh from BlacktipH Fishing shared on his Instagram the other day. He was fishing and hauled in this gigantic iguana in South Florida.

Just like the snake above, this isn’t something you see every day:

What’s up with this Summer?! We’ve got dudes catching iguanas, snakes fighting humans for fish, and ‘METH ALLIGATORS‘ are now a thing!

What’s nuts is he could’ve released the fish and this would’ve happened:

I catch and release, but I never imagined releasing the fish to the snake 😩@NatGeo pic.twitter.com/e9hF4vmYy0

For more on this story, you can visit Fox News.