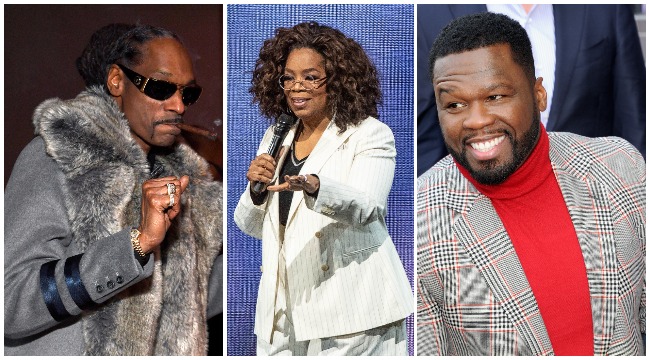 At the time of this writing, Oprah is probably forcing her way into a woman’s footwear headquarters, buying the company in all cash, and then burning the entire thing to the ground.

Jobs will be lost, families will be ripped apart, an Oprah will see to it that none of them ever work in fashion again.

Someone needs to pay for what happened at The Forum in Inglewood, California on Saturday.

While giving a speech during a stop for her 2020 Vision Tour, the country’s first ever black multi-billionaire was victimized by a particularly stubborn patch of air and took an endlessly watching digger in front of hundreds. The irony: she was talking about how balance is the key to success.

There was nobody better to deliver the news than King Troll 50 Cent.

50 is alluding to Oprah’s shifting views on Michael Jackson following a Q&A Oprah led with Wade Robson and James Safechuck, two men who say Michael Jackson sexually abused them when they were children.

Oprah, who was once a Jackson fangirl who released an interview with him in 1993 five months before allegations were brought forth, fully embraced the voracity of Robson and Safechuck’s claims. This received so much backlash from fans that Oprah was forced to publicly address it.

The ghost of Michael Jackson finally got his revenge on the friend who betrayed him Saturday night.

This is not about Oprah Winfrey.
This moment transcends Michael Jackson. pic.twitter.com/RQmXc7TBOW

So they said Michael Jackson was responsible for Oprah’s fall. Here is video evidence 🤣pic.twitter.com/NQAfOvkdyE

Snoop Dogg, who is fresh off of apologizing to Oprah’s best friend Gayle King for calling her a “dog-haired bitch,” decided he didn’t want to be the nice guy any more.

This edit will make you laugh and cry at the same time.

The internet is always better when it embraces people taking tumbles. Especially if they happen to be one of the most influential people in the world.