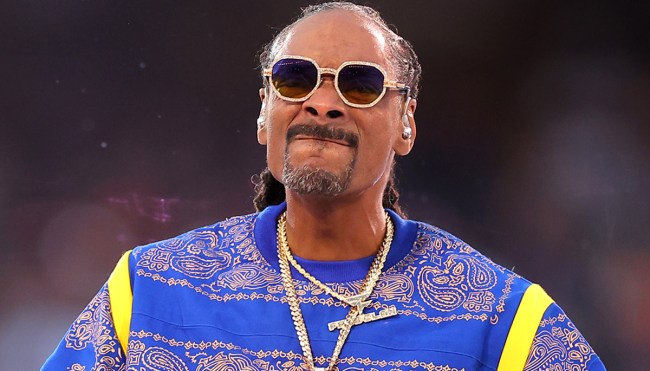 It’s been 30 years since Snoop Dogg found himself thrust into the spotlight he’s managed to remain in since he first made a name for himself thanks to his collaborations with Dr. Dre during the infancy of Death Row Records, and it’s safe to say he’s taken full advantage of the many opportunities to come his way over the past few decades.

Plenty of people would be more than content with simply being a member of hip-hop royalty. However, the same can’t be said for a man whose lengthy résumé includes doing play-by-play for an NHL team, serving as the face of a wide variety of incredibly on-brand products, and co-hosting a cooking show with Martha Stewart.

It would probably be easier to list all of the celebrities Snoop hasn’t met over the years based on the number of famous people who’ve shared stories concerning their encounters with him (anecdotes that typically revolve around them getting uncontrollably stoned courtesy of the infamously strong bud the legendary marijuana enthusiast relies on).

That information came to light when Snoop recently sat down for a wide-ranging chat with Logan Paul. The conversation eventually turned to basketball, which led to the Doggfather revealing he’s still never met Jordan despite receiving a $2 million offer to perform at an event held in the NBA legend’s honor where he would’ve presumably been able to check one more thing off of his bucket list.

Here’s what he had to say about the decision to turn down that massive bag and miss out on the chance to link up with the player he said he’s admired since he made a name for himself as a member of the Tarheels:

“One of the craziest deals I turned down was, like, $2 million to DJ for a Michael Jordan event. I turned it down—and I never met Michael Jordan, and I want to meet him.

I want to meet him as a fan, like, ‘Mike, I’ve loved you since North Carolina. I’m a big fan of yours. I love what you do. You’re one of the greatest to ever do it. Give me a couple of secrets. Can I get a picture with you? Do you want to smoke a blunt? Hey man, it’s been real.'”