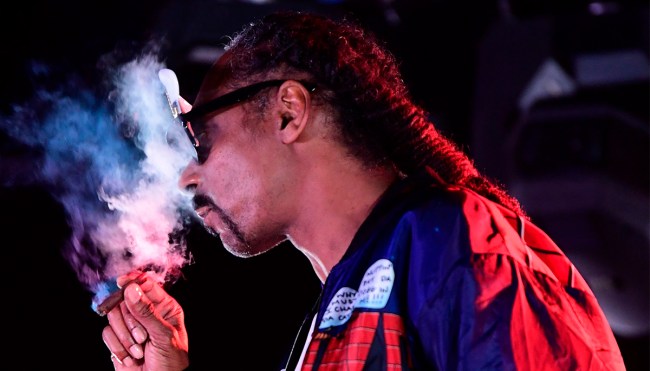 Based on the many, many stories that have emerged over the years, Snoop Dogg seems like the kind of person who gets to do more dope things in a typical week than most people can even dream of achieving over the course of their entire life.

Since establishing himself as one of the biggest names in hip-hop after bursting onto the West Coast scene in the 1990s, the global superstar has expanded his entertainment empire with forays into acting, nature documentaries, sports broadcasting, and a number of incredibly on-brand business ventures—like his own line of gin.

In 2021, the Doggfather landed a new gig as a spokesperson for Corona. Now, he’s joined forces with the brand to launch the Snoop Can, an insulated sleeve that lets you keep your beer cold that also features a button you can press to treat yourself to a collection of Snoopisms like “I find my own bright side. When life hands me lemons, I ask Life if they’ve got any limes instead” (here’s how you can get your hands on one yourself). 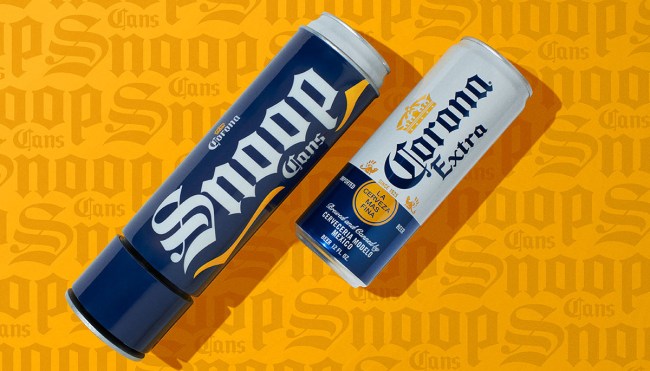 I obviously jumped at the chance to chat with Snoop about that new project in addition to a number of other topics in a conversation where he shed some light on a couple of items he hasn’t checked off of his bucket list, became one of the first people to make me see the appeal of the metaverse and NFTs, and revealed how he managed to get away with smoking weed in the White House.

BroBible: Snoop. It’s an honor and a privilege to get to talk with you. I appreciate it.

Snoop Dogg: What up dawg? My pleasure, man.

Can you give me the lowdown on the new collab with Corona?

We just wanted to put out the can along with some of my, you know, cold slogans and slang to make people feel good about themselves when they’re enjoying a Corona.

It’s a slim can, so it’s easy access, you know? You could drink a couple of them, you don’t have to just drink one.

There’s a button on the sleeve you can press to hear some of your words of wisdom. Did you dream them up yourself or did you get a little bit of help?

Me and the Corona team came up with them. They work very well with me. They got great creators and great people that I love working with.

It’s a mutual agreement on what we do and how we speak to the people in the voice of Snoop Dogg.

I’d like to pivot from drinking to cooking. You released your own cookbook a few years ago and have been lucky enough to get some culinary tips from Martha Stewart. How often do you make food for yourself and what’s your favorite or signature dish?

I cook probably two or three times a week. My go-to dish is Lobster Thermidor. I also like to go with beef short ribs with rice, cornbread, corn, and salad on the side. You know, mix it up a little bit.

Is there anything that’s caused you trouble in the kitchen or that you’ve had difficulty mastering?

What’s that s—t called? Is it lasagna?

I sample that s—t and be like, “Man I gotta throw this s—t away.”

Matt Barnes told a pretty wild story about a party you were at after the Warriors won a playoff game in 2007. You don’t necessarily have to name names, but are there any other teams or athletes who stand out when it comes to how well they can hang when they’re partying?

There’s a lot of motherf—kers that can hang. NFL, NHL, MLB, NBA; their tolerance is high as a motherf—ker.

Like, you wouldn’t imagine an athlete’s tolerance to be that high, but I guess, you know, since they workout and their endurance level is so high, they’re able to compete.

I’ve not really had anyone athletes fall out on me. Like, a lot of rappers, and you know, females, are falling out from trying to hang with the Dogg, but athletes, they go.

I recently heard you say you’ve never had the chance to meet Michael Jordan. You’re the kind of person who seems like they’ve met everyone and done it all, so I’m curious if there are any other things you haven’t managed to do that might surprise people.

I think Michael Jordan is like the ultimate. You would just think that we know each other and that we’ve met because some of his friends are my friends, but I’ve never been around him.

That’s like the ultimate because he’s looked at as the greatest basketball player ever. Now, I’ve met Bill Russell. I know Kareem Abdul-Jabbar. I know Magic Johnson. I knew Kobe Bryant. I know LeBron James, but no Michael Jordan,

What’s up Mike? Where you at?

Are there any other things on your bucket list, whether it’s people you haven’t met or things you haven’t gotten around to doing?

So that’s like a dream to me. If I did have a dream or something that I haven’t done yet, that’s it.

I’ll try and help get the word out then.

You’ve been fairly involved in the metaverse and NFTs and things in that sphere. How would you describe the appeal of NFTs to people that might still not be sold on them?

Well, I had to learn my angle because in the beginning I was confused as well. I didn’t know what it was about.

My angle was music—to put music in the metaverse and to make NFTs and give people a chance to own my music; to recreate and procreate with me and to make remixes and to just do whatever they wanted to do with the song. So I figured out that lane.

As far as the regular NFT world, I purchased a Bored Ape. If you buy an NFT, you’re able to own 100% of the IP. So I’ve created a clothing line, an ice cream shop, an action figure, and a live-action character. We’re working on a cartoon right now.

There are ways to take your NFT and make it do what it do. You may not have the finances or the things that I have, but there are still things that you can do to create different revenues out of that NFT, depending upon what that NFT is.

My profession is music, entertainment, and business. So, I took that traditional world and inverted it into the metaverse and NFT space and tried to bring them both together.

I can’t talk to you without talking about a certain topic I know is near and dear to your heart. Where does smoking weed on the field at the Super Bowl before the halftime show rank above the craziest places where you’ve partaken?

I mean, I didn’t know they were watching me.

They’re always watching, Snoop. You have to know that by now.

I figured that part out. I thought I was being real inconspicuous. You know what I’m saying?

I’m looking around while smoking and thought I was okay. Then, I looked at Instagram four hours later and I watched myself back like, “Hey, ain’t this a bitch. I thought I was hiding.”

And the NFL told me, “You better not smoke before you get on stage.” Okay NFL, I won’t.

Are there any other unique places where you’ve smoked that stand out?

When Obama was president, I went to meet him. Herbie Hancock had got some sort of presidential award and we got to meet Obama. When I went in there, it was like a party and a dinner. Everybody was eating expensive food that I would never eat.

I’m like, “What the f—ck is this expensive-ass s—t? Fried snails and s—t. Hell no.” So I see a couple of people in the back. They look like maids or butlers.

I’m in the White House. They let me in, so I’m gonna be me. I walked to the back to where the kitchen is and they’re going crazy when they see me, like, “Oh my God, it’s Snoop Dogg.” I’m like, “Hey, where the bathroom at?”

So the butler comes over to me and he’s like, “You need to do number one or number two?” I said, “The number three.” he said, “What’s the number three?” And I said *mimics hitting blunt*. He said, “Oh, that bathroom right there.”

I slid nto the bathroom and went into my sock. You know, you gotta go through all kind of security and s—t, but they didn’t pat my socks. So I pulled that thing up out of my sock and *sparks blunt and takes a hit*

Here’s to you, Mr. President.

And here’s to you, Snoop. Thank you very much. I appreciate the time.

Portions of this interview were edited for clarity.