A Massive Fire In Florida Damaged More Than 3,500 Rental Cars In A Blaze So Big Michael Bay Would Be Jealous 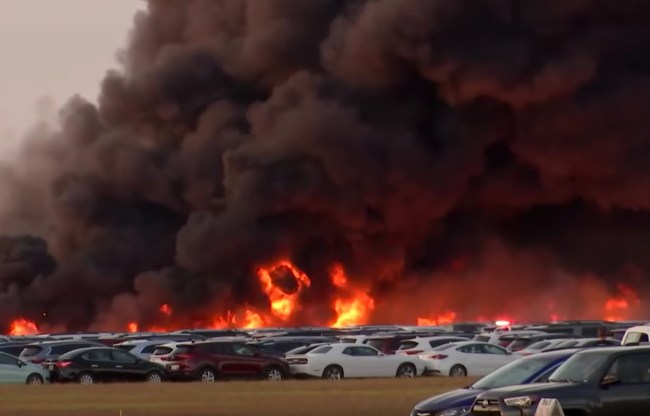 Firefighters were called to put out a blaze spanning 15 acres over the weekend in Florida. In total, over 3,500 rental cars were damaged at an overflow lot that service’s the Southwest Florida International Airport in Ft. Myers.

The fire took place in a grassy area that is being used as an overflow lot right now due to the massive decline in the need for rental cars. When firefighters arrived on the scene there were around 100 cars on fire and that number ballooned to over 3,500 by the time they were able to extinguish the blaze.

This is definitely one of the largest fires I’ve ever seen footage of. And investigators are still ‘trying to determine the cause of the fire’ which isn’t sketchy at all right now. Nope, not at all.

If FINALLY rained here in Southwest Florida on Sunday for the first time in what feels like several months. We are under a drought right now. A blaze this big could’ve erupted into statewide chaos had the heroic firefighters not been unable to get things under control in a hurry.

View from the Huey pic.twitter.com/arPbTPE6dN

This is crazy 😫 Dozens of cars caught fire at the Fort Myers (RSW) airport. What is happening 😭 pic.twitter.com/Y9zCEADiXc

The blaze began Friday, spanned 15 acres and originally involved only 20 cars in the grassy rental car overflow area at the airport in Fort Myers, fire department officials said.
But by the time it was extinguished, the flames had destroyed more than 3,500 rental cars, a Lee County Port Authority spokesperson told CNN affiliate WINK.
Melinda Avni, Mitigation Specialist for Florida Forestry Service of Caloosahatchee, said authorities were called to put out the fire around 5 p.m. Friday, when there were about 20 vehicles involved.
“By the time we had units on the scene, we had 100 cars (on fire). We lost count after the hundreds,” she said.
The fire sent plumes of smoke into the air near the airport.
Black clouds of smoke could be seen for miles around Fort Myers, a city of about 82,000 people in southwest Florida. Ground and aerial support was provided by Florida Forestry Service and multiple fire departments, Avni said.
At least 80 airdrops were made by the Charlotte County Sheriff’s Office’s aviation unit, it said in a Facebook post. (via)

Every comment on Twitter is something along the lines of ‘don’t worry, their insurance will cover everything’ which isn’t a red flag at all, definitely not during a time of national crisis when businesses are tanking. Not sketchy in the least bit.

The start of the 2020 Atlantic Hurricane Season is just a few weeks away so I’m sure the state of Florida will have plenty of news to provide in the coming months outside of everything else going on in the world.