Twitter Hilariously Celebrates The 10-Year Anniversary Of ‘Spider-Man 4’, A Movie That Does Not Exist 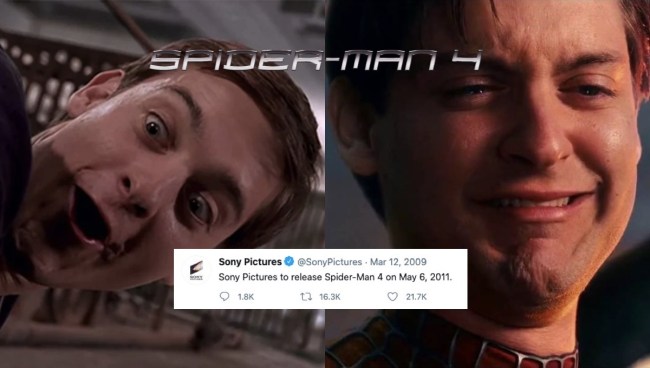 In the history of comic book movies, there are few “what ifs” more tantalizing than the prospect of a fourth Spider-Man film in the original Sam Raimi franchise (that said, what The Dark Knight sequel would’ve been had Heath Ledger not tragically passed remains the king of that category).

As the story goes, while the first two films in the Spider-Man franchise were both sweeping financial and critical successes, 2007’s Spider-Man 3 — while still extremely financially viable, earning nearly $900 million at the global box office — the critic and fan reception dipped precipitously.

Nevertheless, Sony appeared to shrug off the franchise’s stumble and remained confident enough in Raimi to greenlight Spider-Man 4, which was announced in early 2009 and dated for May 6, 2011.

Obviously, Spider-Man 4 never came to be, as Sony instead opted to reboot the franchise in 2012 with the Andrew Garfield starring The Amazing Spider-Man — a decision that ultimately proved to be unwise, as the character was rebooted again in 2016 with the debut of Tom Holland’s version in Captain America: Civil War, a joint effort between Sony and Marvel Studios.

Today, May 6, 2021, is what *should’ve* been the 10-year anniversary of Spider-Man 4, so movie fans have taken to Twitter to “celebrate” the occasion in hilarious fashion.

'Spider-Man 4' would have celebrated its 10th anniversary today 😢 pic.twitter.com/dw16FnZHfD

10 years ago today, ‘SPIDER-MAN 4’ would have released in theaters pic.twitter.com/wp0hJuOgEA

Sony telling Sam Raimi that the plans for Spider-Man 4 are going to change pic.twitter.com/knBPaykQjL

Spider-Man 4 poster hanging at the Licensing International Expo in Las Vegas in 2010 pic.twitter.com/GdNpP0PMad

Society if Spider-Man 4 came out ten years ago today pic.twitter.com/mEHoPi9DYH

Favourite part of spider-man 4 was when Tobey Maguire Spider-Man turn him self into a pickle funniest sh*t I ever seen https://t.co/qzh6vhdJC6

We could have had Spider-Man 4 starring Tobey Maguire 10 years ago… pic.twitter.com/gqmuVywKhM

As fate would have it, both Tobey Maguire and Sam Raimi are likely to get their shots at redemption, as Maguire has long been rumored to return in Marvel’s Spider-Man: No Way Home, while Raimi is the director of Doctor Strange in the Multiverse of Madness. Given that Marvel Studios has already confirmed that those two films will be connected, perhaps Raimi will get to give his iconic Spider-Man the farewell he always wanted to.

RELATED: There Are RUMORS ‘Spider-Man 4’ With Tobey Maguire Could Happen