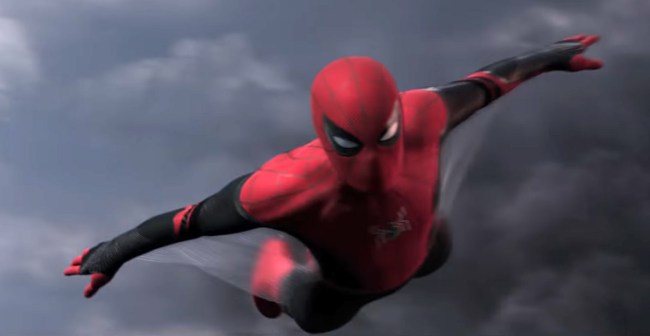 Unlike Marvel’s upcoming Captain Marvel movie, which takes place before the events of Avengers: Endgame, our first look at Spider-Man: Far From Home takes place AFTER and therefore has spawned a plethora of fan theories about what takes place in the MCU’s penultimate film.

First of all… duh… Peter Parker is alive. Oh, and so is Nick Fury.

Second, as we discussed yesterday, where’s Tony Stark? Or, dear God, do we really not want to know?

And third, fourth, fifth, etc… here are some more theories about Avengers: Endgame that have come about as a result of the release of the first Spider-Man: Far From Home trailer.

As Alexis Nedd of Mashable points out regarding the trailer, “Um, does any of this seem like it takes place in a world that very recently experienced the human apocalypse?”

No, it certainly does not.

The world’s rapid return to normalcy in Far From Home seems to indicate that Thanos’s snap was negated and not reversed. Ordinary people don’t seem to be laboring under the trauma that the Snapture would cause — what parent would let their child go abroad for weeks when they were very recently made aware of the fact that life can end with the snap of two big, purple fingers?

How either of those things could have happened has yet to be determined.

Mat Elfring of GameSpot also offered up a couple of theories that might end up being true.

With regard to the missing Tony Stark…

Well, Tony Stark will die at the end of Avengers: Endgame, and somehow, this will happen when Fury and Stark are together, but Spider-Man will not be present at the time. Stark will inform Fury–while dying–that he needs to watch over Parker as he’s still new to the superhero game, and Fury accepts the role.

At this point, with so much speculation leaning that way, if Tony doesn’t die in Endgame I will almost be disappointed.

Nick Fury asking Peter if he’s “going to step up or not” feels much bigger than just one battle; it sounds like Fury is recruiting Spider-Man because there’s no one else to call on. It’s as though the world has lost most, if not all, of its Avengers, possibly because they had to make the ultimate sacrifice to change the timeline and stop Thanos’ Snap from ever happening.

He also points out that the giant check Happy is holding in the trailer is signed by Pepper Potts, not Tony, which may or may not be a sign.

And what is going on with Avengers tower?!

Bad news for Avengers Tower – It's either being torn down or renovated. pic.twitter.com/E432Z1BFal

There are more theories, of course, and will continue to be until Endgame premieres on May 3rd. Until then, I guess we’ll just have to speculate. Which we will, of course, do… a lot.