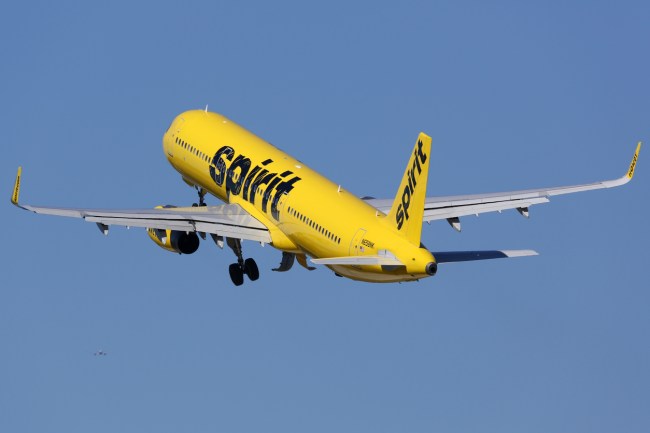 Do you want to hear about the worst flight ever? It involves possibly three drunk passengers, a man puking into a woman’s hair, a couple perhaps having sexual intercourse in the plane’s bathroom, one forced deplaning, a delay, and Spirit Airlines. Strap in kids, this one is a doozy.

This Spirit Airlines flight was traveling from Chicago to Baltimore on Tuesday morning around 8 AM, but before the plane even took off, it was a complete and unmitigated drunken disaster. An allegedly drunken passenger got sick while the plane was still on the ground and puked into the hair of a woman. Where is an air marshall when you really need one?

Cassidy Smith was a passenger of the chaotic flight and documented the exchange of bodily fluids on Twitter.

Thankfully, the initial regurgitation did not cause an immediate chain reaction of other passengers to puke a la Family Guy. Does this gentleman know that the airline provides sickness bags for passengers who are feeling queasy? Or did Spirit Airlines start charging for barf bags?

The video shows a young woman having her hair combed by a Spirit Airlines flight attendant who was wearing gloves. No word on whether Spirit charged the woman for the water to clean her hair.

Passengers were forced to deplane so that the vomit could be cleaned up. That provided an opportunity to the girl who was chundered on to go to the bathroom and wash the bourbon-scented chunks out of her hair. The puker seemed to be disoriented as he was escorted off the flight.

But not so fast! Now we all have to deplane so they can deep clean the plane. pic.twitter.com/qWA83ComA3

The passengers boarded the plane for the second time and were ready to fly to Baltimore. But not so fast. A man and a woman locked themselves in the bathroom of the plane. Were they trying to join the Mile High Club despite still being on the ground?

“SIKE! Jk. We actually were taxing out to finally take off when these two drunk idiots lock themselves in the back bathroom and flood the back of the plane (in no way related to the 1st drunk guy),” Smith wrote on Twitter. Spirit Airlines joked about how this flight seemed like more a flight out of Las Vegas and not Chicago.

The pilot & crew were truly amazing during this whole debacle @SpiritAirlines! They deserve a big raise. pic.twitter.com/PFbDCTHeuW

When you travel on the Greyhound of air travel, expect anything.