Disneyland Is Selling Beer And Booze At ‘Star Wars: Galaxy’s Edge’ But It Will Cost You A Literal Fortune To Get Drunk 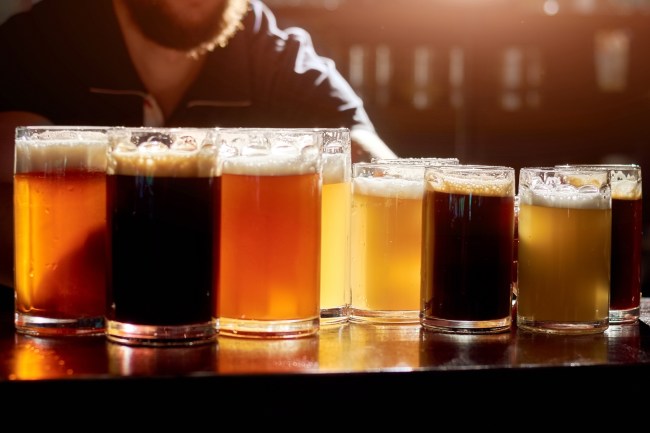 Star Wars: Galaxy’s Edge will give fans the chance to step away from reality and completely immerse themselves in the world of Star Wars. It designed to be set on a new planet in ‘the Outer Rim of the Unknown Regions’, a ‘remote frontier outpost’ on the planet Batuu. The ‘Millennium Falcon: Smugglers Run’ ride will allow fans to fly the Millennium Falcon on customized secret missions.

This is the FIRST part of the Disneyland park that will sell alcohol to visitors. Star Wars fans will be able to visit the cantina where they can purchase special beers and cocktails but in order to get drunk they might have to take out a second mortgage.

The park has come up with some custom Star Wars-themed beers and cocktails that will be served at the cantina. The higher-end portion fo the menu ranges from $75 to $32….For drinks. And I know fans will pay this because they come with souvenirs but that’s still f’n insne to me.

The flight of beers comes with a souvenir board and allows you to sample each of the draft beers but it will set you back $75. The media got a sneak preview of Star Wars: Galaxy’s Edge before it opened up to the public last weekend and Comicbook.com contributor JK Schmidt wrote about how crazy expensive the drinks are:

The priciest drinks range from $75 to $32, but they do come with souvenirs that Disney is probably hoping are worth the price of admission.
The most expensive option is the beer flight, which gives you the option of trying every draft on tap for $75 on a souvenir board. It comes on a hardwood plank with decorative hollowed Rancor teeth, in which the beer samples are actually served. While it’s a neat souvenir, the beers include a Sierra Nevada Tropical IPA, a New Belgium Red Ale, a Blue Point Lager, and a Ballast Point IPA. All good beers, but the price of admission might be turn off.

The next most expensive option is also alcoholic, but might prove more palatable among collectors. The Yub Nub is a spiced rum drink with fruity mixers, and comes in a souvenir mug from Endor. This mug is charged with a lot of the same symbols you’ll find among the Ewok Village. But still, $42 is a bit steep for a cup and some overpriced booze.
The next most expensive option is a non-alcoholic is appropriately called the Cliff Dweller, which is served in a souvenir Porg mug for $32. This is just a fancy ginger ale concoction, mixed with citrus, coconut, and a blend of hibiscus-flavored grenadine. (via)

I’m not alone in thinking that these drink prices are outrageous. Yes, you get a souvenir. Does that justify charging $75 for a beer flight? Hell, no.

$75 for a drink? Disney, I love you but this is seriously greedy. You’re already unattainable for some. Make #GalaxysEdge accessible. https://t.co/drMCOUUKMq

Better have a trust fund to visit Disneyland this summer:

Coca-Cola in a spherical bottle: $5

The beers themselves sound pretty great though and I hope they sell these outside of the park at some point in time:

I hope this beer lineup is part of Galaxy’s Edge at The Studios as well: pic.twitter.com/VHGcrFncSI

Here’s a look inside of the cantina:

It’s 5’oclock somewhere in the Galaxy right?! Anyways, the breakfast drinks and “food” is available and honestly, I’m ready to CONSUMEEEEEE! #GalaxysEdge pic.twitter.com/zvKJWTbHCK

Here’s a look at the full cocktail menu (via CNET):

You can check out pictures of the alcohol menu at the cantina here on Comicbook.com and if you’re in Florida like me, the Star Wars: Galaxy’s Edge portion of Disney World opens up this August so mark your calendar for that. It will be the same size as the one in California’s Disneyland.