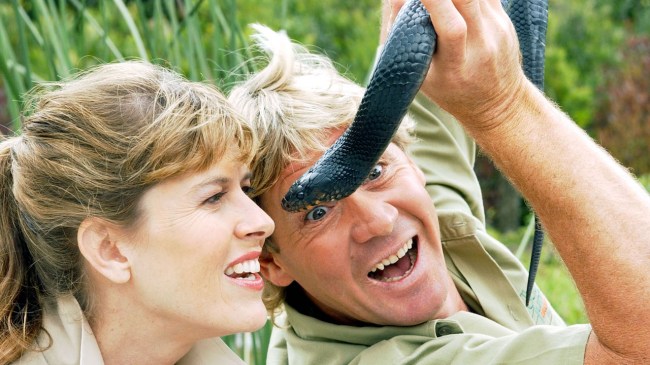 If you were born in the 1990s, odds are you watched hours upon hours of Steve Irwin’s Animal Planet nature shows — Croc Files and The Crocodile Hunter Diaries — when you were growing up.

Led by the endlessly charismatic, kind, and frankly bonkers Steve Irwin, the Crocodile Hunter had a way of making nature truly thrilling for the easily distracted mind of a child.

However, as we now know, Irwin’s endless love of nature ultimately cost him his life, as he was tragically killed at the young age of 44-years-old when he was pierced in the heart by a stingray barb off the coast of his native Australia while filming the underwater documentary Ocean’s Deadliest.

And because time is a world-class track sprinter who seems to get faster and faster as the race goes on, the 13th anniversary of the Crocodile Hunter’s untimely death just passed this week.

In a tribute to her late husband, Steve’s widow Terri Irwin took to Twitter to remember her late husband by sharing a clip of an interview he once gave with 60 Minutes that shows the passionate wildlife lover at his absolute best.

They say you should live each day to the fullest. Steve actually did. I miss him every day, and I am so proud to see his mission continue. https://t.co/4NVxbNN9hr

Whether or not you have an interest in wildlife — which, truthfully, I never have — it’s difficult to not find yourself uncontrollably drawn into what Irwin’s doing because of how blindly passionate he is about it. That type of energy is rare, and when you find it, it’s a sight to behold.

We miss ya, Steve. Hopefully, you’re raising plenty of joyous madness wherever you are, Crocodile Hunter.