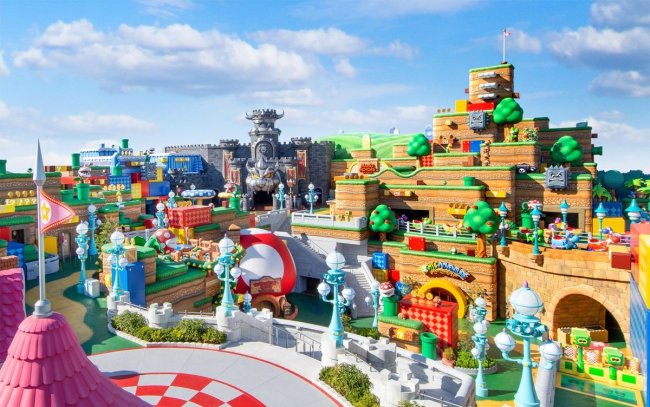 Let me just say that Japan, in general, seems like the perfect place to take acid. Tokyo ranks near the top of my list of cities I want to travel to and that’s not even considering the potential influence of hallucinogenics. Not only is your cultural world entirely flipped upside down but it’s like being transported to the center of a Blade Runner movie. Take a tab or two and you’ll wind up inside of the Wreck-It Ralph universe instead.

Take this soon-to-be-opened Super Nintendo World at Universal Studios Japan, for example: could you imagine tripping inside of The Mushroom Kingdom? Stumbling into Koopa Troopas and conversing with Toad. Have a couple of shots of Limoncello with Mario and Luigi before saving Peach from Bowser’s Castle? Electric. Forget Phish concerts: this is the type of stuff drugs were invented for.

As the official Twitter for the theme park revealed on Monday, Super Nintendo World is set to open on Feb. 4. Featuring tributes and loving recreations of Nintendo’s franchise, but specifically the Super Mario series of games, the area will launch with a Mario kart ride that utilizes augmented reality headsets. To coincide with the announcement of the opening date, Universal Studios also shared a few images of what fans can expect to see when it opens.

Each kart for the ride has four seats, and riders will have some control through the steering wheel but it’ll also be on rails. The AR headset will give users the opportunity to collect items and throw shells at other karts on the track. Nintendo and Universal is already rumored to be building an additional area next to the Mario Kart zone, with it expected to focus on Donkey Kong. [via Yahoo]

Check out these just-released photos from the breathtaking land! 🤯 #WeAreMario pic.twitter.com/dojQjpL7rh

If and when I’m ever allowed to travel the globe again, Japan will certainly be one of the first places I go. All I gotta do now is find myself a dealer in that corner of the world.