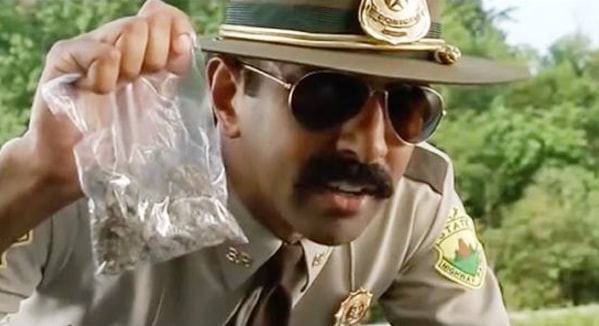 Steve Lemme AKA Mac and founding member of Broken Lizard gave an interview with Seven Days where he gave a coded answer as to the release date of “Super Troopers 2.” Lemme was asked if and when the release date was and he said: “There is, but I can’t tell you what it is. Here’s what I can tell you: It’s springtime and there’s a very obvious date, which happens to fall on a Friday this year.” You check your 2018 calendar and see that April 20th falls on a Friday next year. 4/20, which as everyone learned in drug school is the official marijuana holiday. This news is more delicious than delousing powdered sugar. 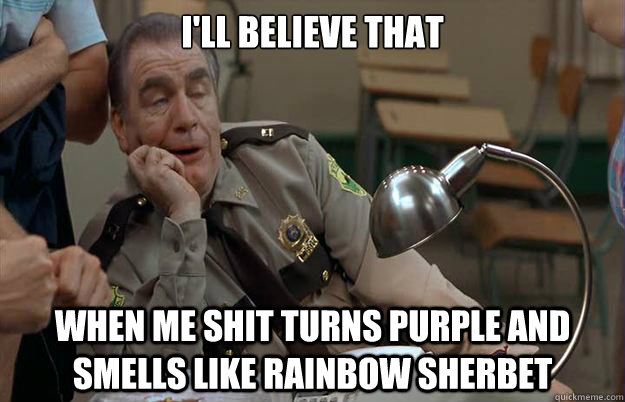 Captain O’Hagan, no it’s true. We are finally getting “Super Troopers 2” over 16 years after the original appeared. And to all of you Cheeches out there, what better day for the stoner classic comedy than 4/20!

“It’s going to be our widest release,” Lemme said. “And it’s testing better than any movie we’ve tested. It came out fantastic.”

Mac gives some slight insight into “Super Troopers 2.” “Well, we do all have cellphones in this movie. But otherwise, it seems like time has stood still for these state troopers. Which is good, because we didn’t really want to answer the question of where these guys have been for the last 15 years, although we do answer it.”

Lemme also gave details to what he called the “nastiest love scene” with Farva AKA actor Kevin Heffernan.

“Yeah, it’s terrible. I won’t give away why we’re doing it. But ever since Kevin’s tuna can, meaning his penis, which is wider than it is long, was shown in the first ‘Super Troopers,’ in that powdered sugar shower scene, we realized that when you write stuff, you are gonna have to perform it one day. You know, you can tell a lot about what kind of a lover a person is based on how they do their love scene. There’s an etiquette when you do a love scene, something called “mouth maintenance.” You brush your teeth, pop in a breath mint, put on lip balm. You make it nice for your partner. Kevin did none of that stuff. It was burrito day at lunch that day, so he ate two burritos before we filmed the love scene. The gum he was chewing…He does this thing called “Farva gum,” where he gets so into character as Farva that he chews the same piece of gum all day long. So he gets to set at 6 a.m., chews the gum for six hours, takes it out at lunch, then puts it back in in his mouth and chews it for another six hours. Then he swallows it. He’s method. When it came time to shoot the scene, all the action was gone in that gum. The first kiss…I can still taste the salsa in his mouth.

The second take, his mustache was just wet. And he says it’s because it was burrito day and he was just sweating. But that’s no good for me. Our tongues touched. I’m pretty sure he did it on purpose, just to gross me out. Then, on the fourth take, he pushed the little nasty piece of gum right in my mouth. His claim there was, ‘I was done with that.’ He reached around and gave me a shocker. Just stuck his fingers up my butt. Making matters worse is that, usually when you shoot a love scene with somebody, it’s a closed set, because you want to be respectful. It’s intimate. But when Farva and Mac are in a love scene, it’s like a UFC steel-cage match. The entire crew was there and they’re shouting stuff, like when he gave me the shocker. The whole thing was very unpleasant. And then it started to rain. So, we had to shoot it again in the rain. Then, after we wrapped, the director, Jay Chandrasekhar, confessed to me, ‘Actually, we got it on the first take.'”

Sexy! Swapping spit with a coworker?

That means only 246 days until the exciting sequel, so quit counting your pubes and start practicing your favorite “Super Troopers” catch phrases. I’m sure you’ll be smoking the reefer that day, just make sure to not litter.