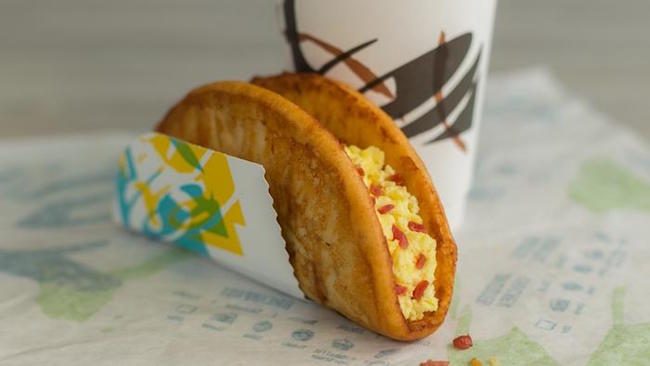 I don’t have any real insight into how the research and development team at Taco Bell manages to churn out such an impressive number of inventive culinary creations at the rate they do, but I like to think the company just sticks a few people in a room, give them an ounce of weed, and see what happens. I just have a hard time believing someone could dream up a Skittles smoothie and Kit Kat quesadillas without the assistance of some mind-altering substance.

The chain has been forced to pivot a bit ever since Chipotle managed to convince the general public that their restaurants serve “authentic” Mexican food, which has resulted in a seemingly endless stream of experiments designed to draw in customers who can see the appeal of a burrito filled with spicy Pop Rocks and a taco with a fried egg for a shell.

I’ve never been in a position in life where I’ve had the chance to order breakfast at Taco Bell, but with that said, I can’t help but be a little intrigued by a new item they’re testing out: a French toast chalupa. According to The San Diego Tribune, the product sports a French toast shell with scrambled eggs and your choice of sausage or bacon along with a side of syrup that finally answers the age-old question: “What if a McGriddle, but Mexican?”

If you’re as oddly fascinated as I am, I regret to inform you that you’ll have to make the trek to Ohio to try it out, as it’s currently only being tested in the Dayton market. At least we have the new dollar menu to tide us over.