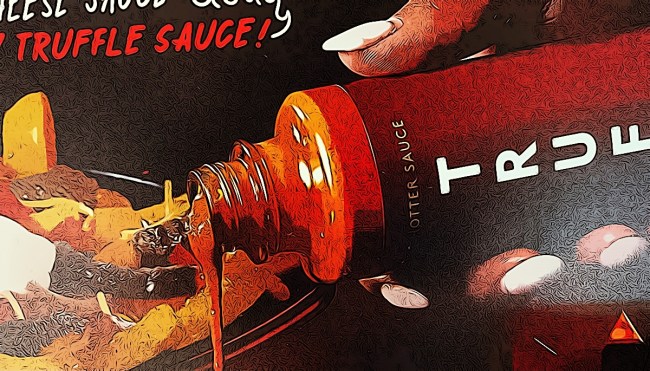 In recent years, Taco Bell has routinely angered its legion of loyal fans by removing a number of beloved items from its increasingly slimmed-down menu, but that hasn’t prevented it from continuing to unveil a number of envelope-pushing innovations seemingly spawned from a test kitchen covered in a haze of marijuana smoke and a dartboard emblazoned with random foods hanging on the wall.

Earlier this week, the chain introduced its newest creation after teaming up with the hot sauce company TRUFF for a very intriguing condiment: a limited-edition Nacho Cheese Sauce taken to the next level by the black truffles it’s infused with.

Unfortunately, the Taco Bell x TRUFF collab is only being dished out at a single location in Newport Beach, California. Thankfully, we were able to dispatch a loyal BroBible reader who’s developed an “unrivaled fast food palate” after spending a decade working in public relations for a number of notable fast food companies who was kind enough to offer his services as a correspondent.

Without further ado, here’s his review of the TRUFF Nacho Cheese Sauce hot sauce (as well as the two items it graces). 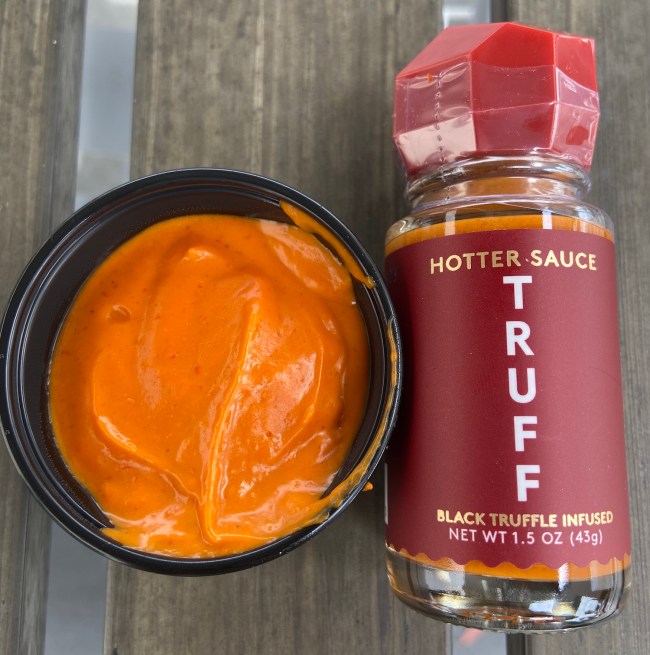 This is an absolute home run. It blends the signature flavors of both offerings perfectly; creamy and with a bit of heat, this is a winning collab.

I’m a firm believer that all nacho cheese should be of the ballpark variety: filled with artificial ingredients and boasting a neon orange color that simply doesn’t exist in nature. Keep your real cheese off my nachos (shakes fist). If you’re a fan of that type of nacho cheese A) much respect and B) you will love this. The heat level is right between mild and medium (skewing a bit more toward the latter). You don’t need a drink at the ready when enjoying this.

You also have to love the presentation. 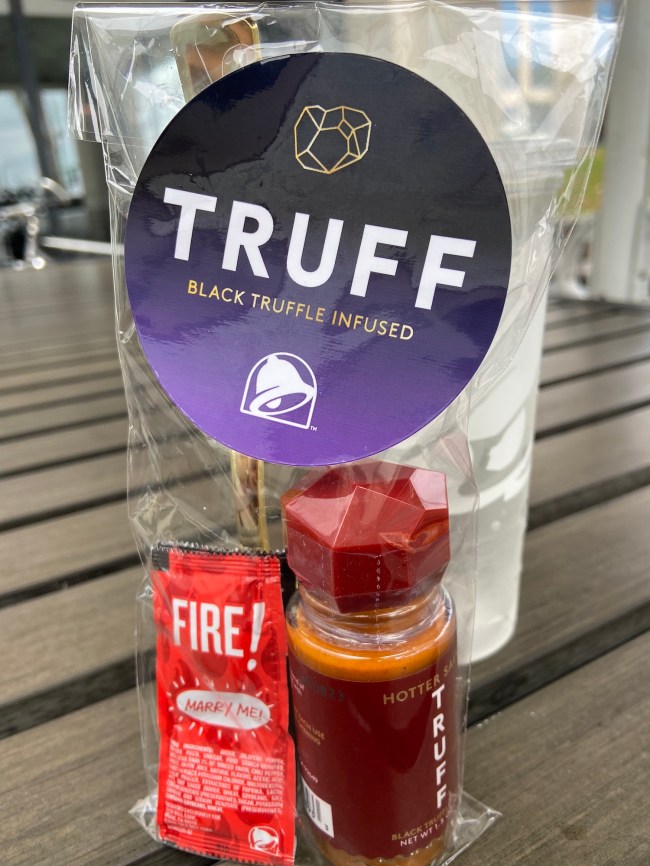 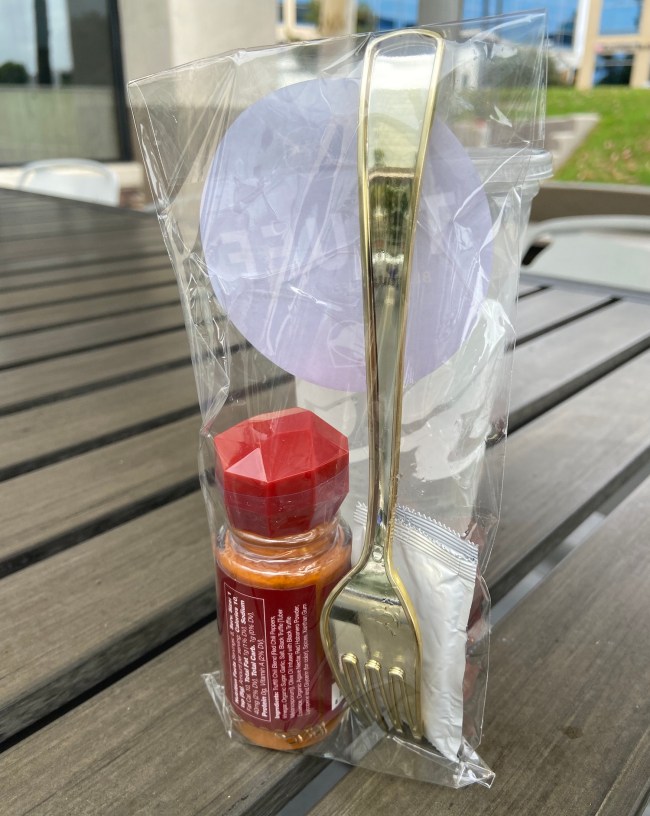 It doesn’t get much classier than that. 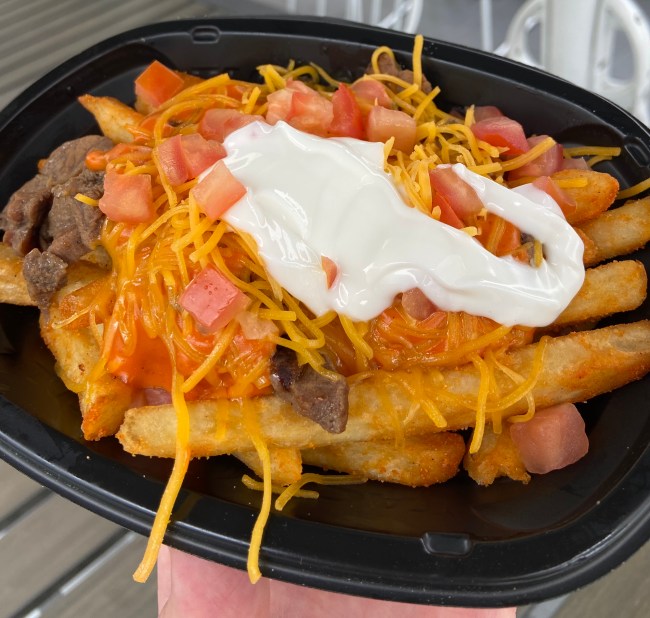 The seasoning on the fries, the spiciness of the sauce, and the cool sour cream work perfectly (extra points if you eat it immediately after receiving your order so the fries can’t steam up in the container and become soggy). The steak, however, is simply…there. It doesn’t elevate the fries, but it also doesn’t make them any less craveable. 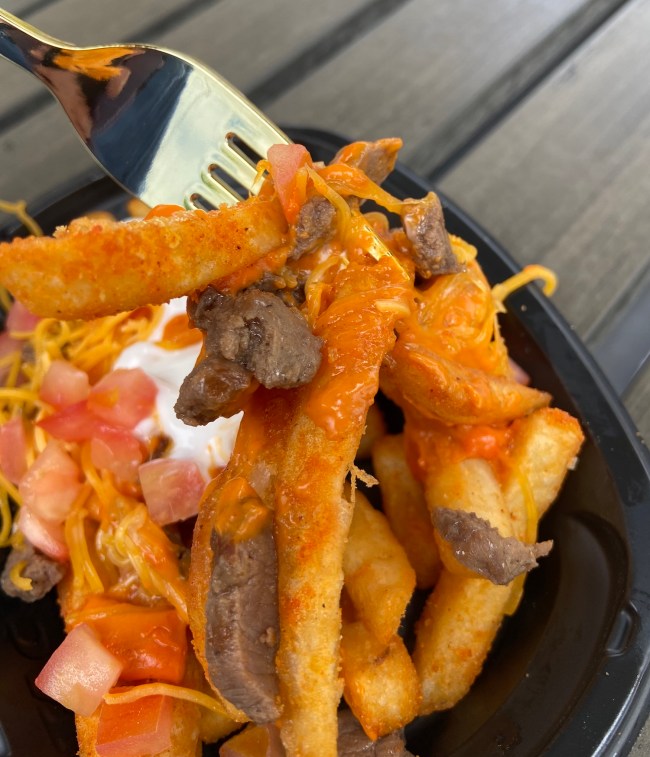 Now, Taco Bell does a lot of things right, but its hot sauce offerings are a noticeable weakness (especially compared to its West Coast rival Del Taco and the brand’s signature Del Scorcho). The TRUFF Nacho Cheese Sauce solves this issue and then some, so if Taco Bell knows what it’s doing, it will make this available nationally. 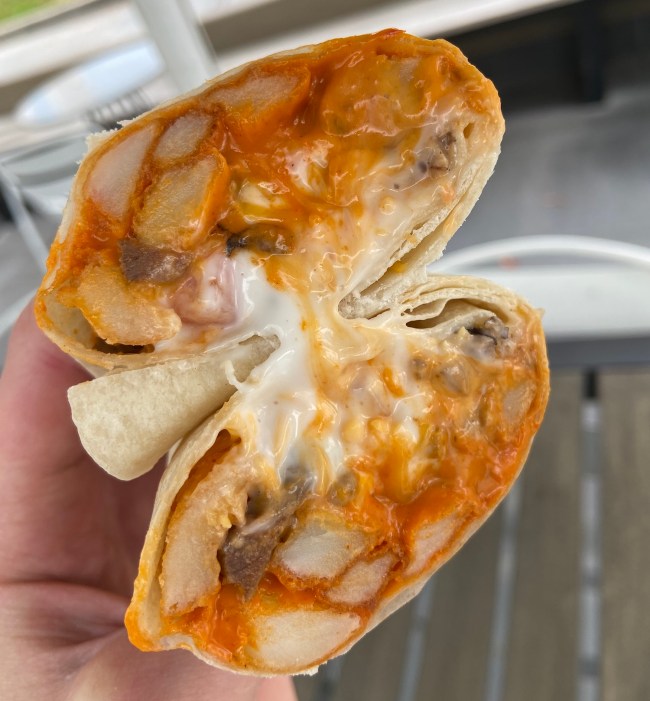 The formula here is pretty straightforward: take the Loaded TRUFF Nacho Fries and wrap them in a burrito.

Every true fast food connoisseur knows Rule #1 when it comes to putting fries in a burrito: they need to be ultra-crispy. Unlike the standalone fries, the burrito was just lukewarm bite after lukewarm bite; the fries had no texture due to the steam in the tortilla they were encased in. When you consider you can just order the fries and even add the TRUFF Nacho Cheese Sauce to other items if you’re so inclined, I’d pass on this one next time (there is always a next time with Taco Bell).

So what’s the final verdict on TRUFF Nacho Cheese Sauce? I can safely say it’s a must-try….or, for the lucky few like myself, a must-reorder.