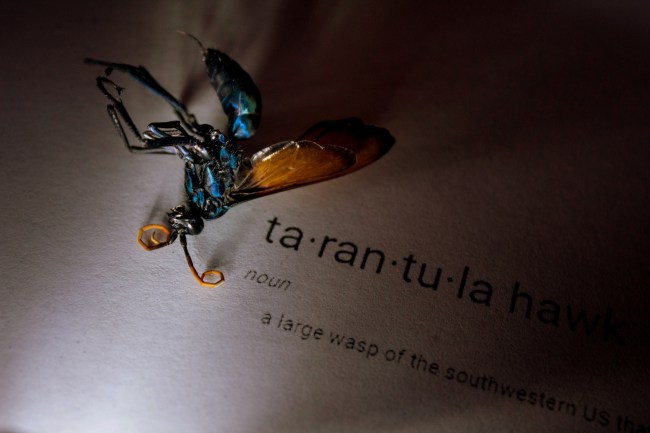 Australia is home to some of the most terrifying creatures on the planet. You can find any number of deadly creatures on land, in the air, or underwater. The box jellyfish, deadly snakes, crocodiles, and some of the scariest spiders found anywhere on earth have all made Australia their home.

I live in Florida, the Australia of America, home to poisonous snakes, alligators and crocodiles, sharks, and everything else trying to ruin my day but the Australian Outback still intimidates the shit out of me. Primarily because of photographs like the one below.

Just check this picture out and tell me you’re still interested in visiting Australia’s Outback in the near future:

Australia, where else. That’s a huntsman spider being carried away by something called a tarantula hawk wasp. pic.twitter.com/hQ1jTHlnKo

Just another day in Australia, right? I imagine the commuters going about their business in the morning. Shuffling through the crowd on their way to work. Passing by this as if it’s nothing more than a flyer on the wall because they see shit like this all day every day.

This image picked up steam on Reddit where the top caption perfectly captures the spirit of this photo. User dakotaisspiderman says “Best part about this post? We all knew it was Australia without reading the description. WE JUST KNEW.” and they’re 100% correct in that assessment.

You can see this picture and know without a doubt that was taken in Australia even if you know absolutely nothing about the creatures in the photograph.

For anyone out there thinking the USA is getting soft and Australia has all the scary creatures I have some comforting news for you. The US has its own Tarantula Hawk Wasp that grows to the size of a sparrow (bird) that has a sting so powerful it feels like being electrocuted in the bathtub according to the NYPost. So, sleep well knowing that exists.