Tasty Tune Tuesday 3/30: Justin Bieber Slaps And We’re Not Going To Hide From It 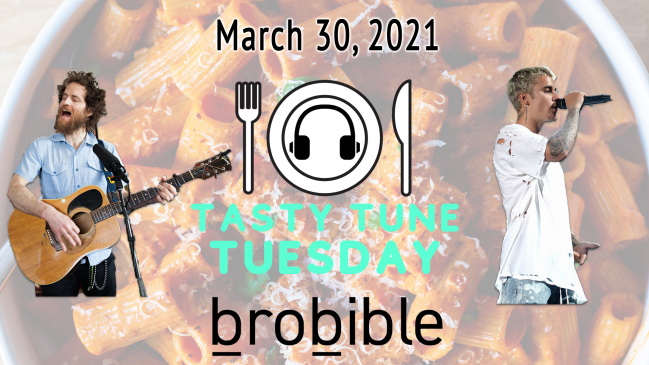 Another week has come and gone, which means it’s time for your ears to feel refreshed. On the third day of every week, I’ll drop ten songs that tickle my eardrums. Variety of tracks will range from hip hop/rap, EDM, country, singer/songwriter, Americana, R&B and everything in between— something for everyone depending on what I’m jamming that week.

I have been feeling very chaotic over the last seven days, so his week’s collection is smorgasbord of moods and genres. Here’s the tracklist for the 19th edition:

It’s been a hard year for everyone, so blues musician Keb’ Mo’ and Old Crow Medicine Show teamed up to bring some positivity to your day. An abstract take about the vaccine, the song is a good reminder that there is a light at the end of the tunnel!

If this is your first introduction to Dispatch, go back and listen to their Silent Steeples and Bang Bang albums first. Out of Middlebury, Vermont, the group was at one point the biggest band in the world that nobody really knew about. They’re an indie/roots group that leans into the jam band space. I’ve been with them for as long as I can remember, and their new album has a few standouts. This is my favorite, and the one that sounds most like their “true sound,” which is hard to pinpoint, because they continue to evolve.

We’re not going to try to pretend that this song isn’t an absolute jam, are we?

Medasin blends his precise, rhythmic synth lines and laid back beats with the delicate vocals of Naomi Wild. It’ll massage your ear drums.

Track No. 6: The Adults Are Talking — The Strokes

I don’t care that this is one of the more well-known songs by The Strokes. Not enough people know The Strokes!

Track No. 7: Catch Me Outside — Ski Mask The Slump God

The vocal texture of Liz Cooper is one of a kind. The sound that she and the Stampede produce can be described in shorthand as outlaw country mixed with psychedelic rock. However, to fully give an understanding requires a much more expansive, less narrow-minded breakdown. They throw a bunch of different genres together in a pot and stir them up into a free, fearless roots-rock record.

This is a perfect blend of authentic Hip Hop and the modern sound of today’s production style. Joose The Conqueror throws his personality all over the track and ties it together with creative rhymes, precise production and a fantastic sample.

Modern reggae with an anthemic twist.