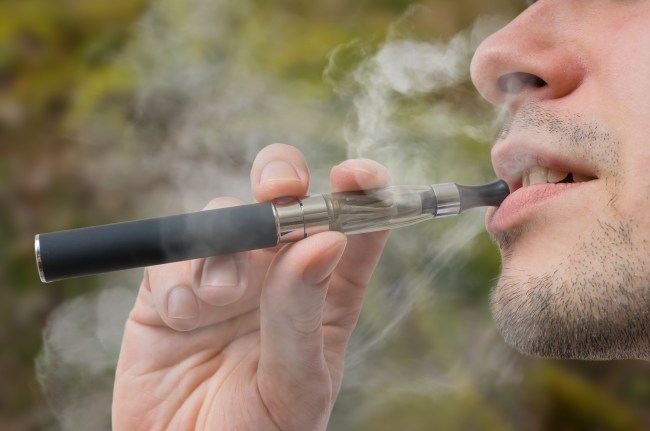 Stop me if you’ve heard this before, but an e-cigarette revolted against its owner and nearly blasted his face off.

Kailani Burton purchased her 17-year-old son Austin a vape in an effort to ween him off smoking cigarettes. It wasn’t long after that Mrs. Burton heard a small explosion in her home before Austin appeared seriously injured

“I could see blood in his mouth and a hole in his chin,” she recalled.

After being turned away at the local hospital in Nevada for lack of resources, Burton then drove her son 200 miles to Salt Lake City pediatric surgeon Katie W. Russell, who compared Austin’s injuries to those seen in “high-speed motor vehicle crashes.”

“He had a very swollen lower jaw and lip, a small burn on his lip and a huge cut in his mouth,” says Russell. “A two-centimeter piece of his jaw was just blown to pieces.”

Russell’s colleague, pediatric ear, nose and throat surgeon Jonathan Skirko, told The Washington Post that Austin’s injuries “kind of like a close-range gunshot wound.” He added that he’s dealt with countless exotic injuries in the past (ie grizzly beat attacks) and “this is one that I had never seen before.”

Teenage boy left with shattered jaw and several missing teeth after his vape pen battery exploded in his mouth https://t.co/QISKCk5yCg

Austin suffered extensive wounds to his mouth, several missing teeth, and a broken lower jaw. According to Live Science, doctors needed to remove a number of teeth because their sockets were destroyed, and a dental plate was inserted under his lower gums to stabilize his jawbone.

Worst of all, Austin’s mouth wouldn’t close properly so doctors were forced to wire his jaw shut for SIX WEEKS to give it proper healing time.

Austin, now 18, is reportedly “doing really well” and has made a full recovery. If there’s a silver lining from this whole shitshow, the consistent smoker has given smoking up all together.

“He just quit,” his mother said. “He does tell people, ‘This is what happened to me. This is what could happen.’ ”

Lithium-ion batteries can be fickle beasts.