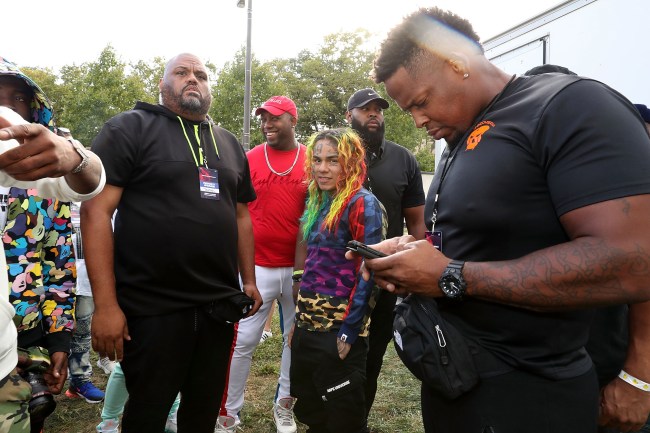 I can’t believe I’m typing this right now but Tekashi 6ix9ine is alive and free.

The world’s preeminent Snitch was released from house arrest this weekend, thus completing his 24-month prison sentence, and he let the world know it.

The 24-year-old Brooklyn rapper confidently galavanted around his old Bushwick neighborhood while hosting an Instagram Live session, took selfies with fans, ate ice cream in Midtown Manhattan, and even found his way to the Garden State Plaza mall for some casual shopping.

Tekashi has taken extreme measures dodge the inevitable target on his back, hiring nearly two dozen security officers to protect him from potential threats.

6ix9ine tells us he plans to keep roaming the streets of the Big Apple — but adds he’ll be rolling “like Trump” in that he’ll have a ton of armed guards around. Specifically, he says he plans to hire 22 of them, all former law enforcement officers.

Tekashi also says he’s gonna have 5 bulletproof SUV-like whips to escort him around town. Despite all those heavy duty precautions … he insists he has “no fear” and is actually excited to get out and about again.

Tekashi 6ix9ine was spotted out shopping at a mall with his security in NY today👀‼️ pic.twitter.com/f9ruZerVqx

Back in October 2019, before Tekashi’s sentencing date in his federal racketeering case, Complex spoke with several security companies about 6ix9ine’s case and while all of them claimed that 24/7 security for the rapper is possible, it is “unprecedented,” expensive, and dangerous.

Shamir Bolivar, CEO of Shadow Group Security and former bodyguard for 6ix9ine, described the massive undertaking associated with protecting someone of 69’s stature and reputation.

“It entails around-the-clock, live-in security or a rotation of shifts of agents. Security gets paid to look over their shoulder so their client no longer has to.”

Peter Curcio, COO of Arrow Security in New York, says that companies determine whether their work would be “armed or unarmed, uniformed or covert” and whether the job would require other equipment, such as vehicles, ballistic vests, K-9 teams, or explosive sweeps.

Curcio claims the going rate for his company’s services would be $140/hour, which would total over $1.2 million for one year.

Tekashi just inked a $5 million deal for a one-hour livestream on the heels of his Trollz song reaching #1 on the Billboard 100, so saying that the 24-year-old can afford the expense is an understatement.

One would have to imagine that Tekashi hiring a team of 22 former law enforcement officers and spending $100,000 on security during his 10-day stay in Los Angeles BEFORE the racketeering charges even took place would indicate that the annual price for his protection would be much higher into the millions.

“Protecting a client involved in a high-profile federal witness case is pretty unprecedented because the witness protection program provided by the government is typically the first and only option,” Bolivar notes.

“This is going to be a case study for a witness to re-enter the entertainment world.”

You couldn’t pay me enough to walk within 20 feet of this dude on the streets.