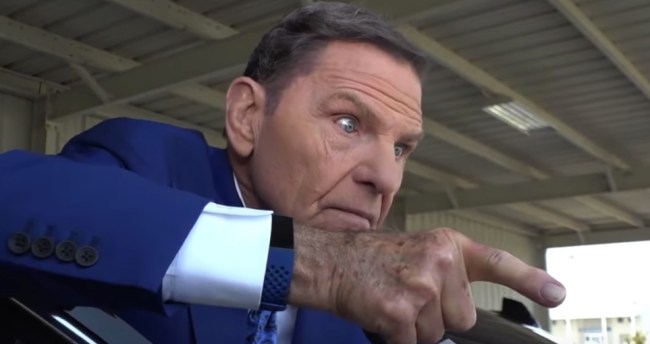 P.T. Barnum allegedly said that age-old adage: “There’s no such thing as bad publicity.” Yeah, well P.T. Barnum was wrong because P.T. Barnum never witnessed this bonkers interview from televangelist Kenneth Copeland. The religious speaker attempted to justify purchasing Tyler Perry’s private jet because people traveling on commercial airliners are “demons.” He might be a smidge hyperbolic, but is he really wrong though?

Former reporter for Monday Night Football and Fox Sports, actress and ex-NFL cheerleader Lisa Guerrero is currently an investigative correspondent for Inside Edition. Guerrero tracked down and interviewed Kenneth Copeland, a mega-televangelist who has a reported net worth of $760 million.

The private airstrip is used by the ministry’s three aircraft including a $20 million Cessna Citation private jet and a Gulfstream V, which was purchased in January of 2018 from Hollywood actor and Madea Simmons himself Tyler Perry. The ministry spent $17 million to build a hangar for the state-of-the-art Gulfstream V. Copeland is said to also have a $500,000 Mercedes Maybach and a $500,000 Rolls Royce Phantom.

Guerrero caught up with Copeland in Branson, Missouri, and interviewed the wealthy man of God. She asked Copeland why a preacher needed a Gulfstream V and he responded by saying, “If I flew commercial, I’d have to stop 65% of what I’m doing.” Do you really want Kenneth Copeland at 35% and wasting his time at the TSA checkpoint and waiting in line to get a 4-piece Chick-fil-A tenders at the airport food court? Absolutely not.

In 2017, Copeland was asked the same question but then he said he couldn’t fly commercial airlines because he couldn’t “get in a long tube with a bunch of demons.” Hey Ken, you’re not on trial for murder, you don’t actually have to give an answer. A simple “no comment” would have been a bit better response than calling every poor folk who flies commercial a demon.

Guerrero asked Copeland if he still couldn’t fly because human beings are demons and the 82-year-old religious man got visibly angry (ironically, he almost looks like he was possessed by a devil), pointed a finger at her and snarls, “No, I do not and don’t you ever say I did!”

“Do you think that’s a good environment for a preacher to be? I wanted to go punch that guy myself,” Copeland said. “I can’t be doing that when I’m getting ready to preach! I could no longer do what I was called to do when I get on the airlines and besides that I need my clothes when I get there.”

This … is incredible.
American televangelist Kenneth Copeland never foresaw that buying a private jet with money raised by his church would prompt difficult questions.
Reporter does an AMAZING job.
The man actually looks unhinged. pic.twitter.com/JK0zwUdSvO

The preacher assured everyone that he got a very good deal on the Gulfstream V. “He [Tyler Perry] made that airplane so cheap for me I couldn’t help but buy it,” Copeland explained. I mean, with Tyler Perry practically giving Gulfstreams away you’d actually be shooting yourself in the foot if you didn’t buy a Gulfstream V. Plus, I bet that the Tyler Perry’s private jet comes with copies of every Madea movie ever made. That alone is worth the price.

There have been accusations that Copeland has used the ministry’s airplanes to fly him and his family on vacations, but he maintains that he only uses the private jet to help the needy.

The moral of the story is that there is such a thing as bad press and you should stay away from doing interviews talking about how you got a bargain basement price on a Gulfstream V from Tyler Perry because you can’t fly commercial because the plane is full of demons.