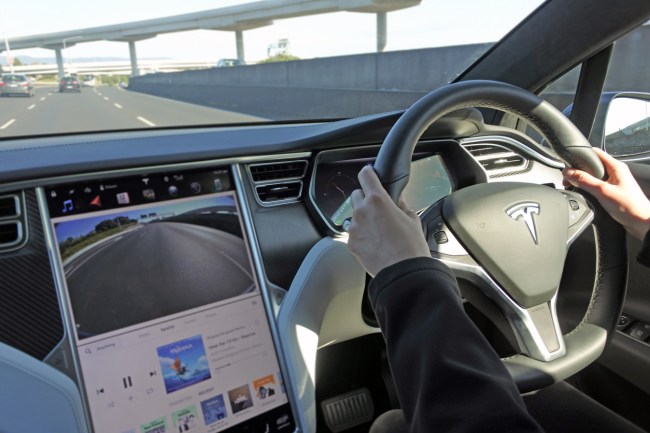 Humans have an uncanny ability to take revolutionary innovations and pervert them to match their own puerile needs.

Take the photograph. Within months of its invention in 1839, the medium was flooded with pornography. Or look at the advent of genetically modified foods, a new technology capable of preventing pestilence and famine. In no time it was used to artificially load cigarettes with nicotine.

Now, Elon Musk has given us our newest debauchery-facilitating technology.

“Police in the Netherlands on Thursday pulled over a Tesla driver who had apparently fallen asleep at the wheel while driving down the highway.” It took several minutes and a siren to wake the driver from his high-speed slumber. “Police administered a blood alcohol test and found the driver to be under the influence of alcohol.”

This Dutch degenerate isn’t alone. In January 2018, a drunken man was arrested driving a Tesla across the San Francisco–Oakland Bay Bridge. After police had successfully pulled him over and woken him up, “he assured officers that everything was fine because the car was ‘on autopilot.'”

The cops didn’t bite. He was promptly arrested for DUI. In November, California Highway Patrol arrested another drunk man asleep at the wheel of his Tesla.

When u pass out behind the wheel on the Bay Bridge with more than 2x legal alcohol BAC limit and are found by a CHP Motor. Driver explained Tesla had been set on autopilot. He was arrested and charged with suspicion of DUI. Car towed (no it didn’t drive itself to the tow yard). pic.twitter.com/4NSRlOBRBL

Why stop there? Well, some of us didn’t.

In April, an, um, adult video hit the internet in which a couple had sex while their Tesla was on autopilot. Tesla’s guide doesn’t address this directly but it states it is “not a self-driving system” and the feature “is intended for use with a fully attentive driver, who has their hands on the wheel and is prepared to take over at any time.”

Yet again humanity has managed to take a landmark technology and use it to get drunk and have sex. I’ll go ahead and chalk that up as another win for capitalism.