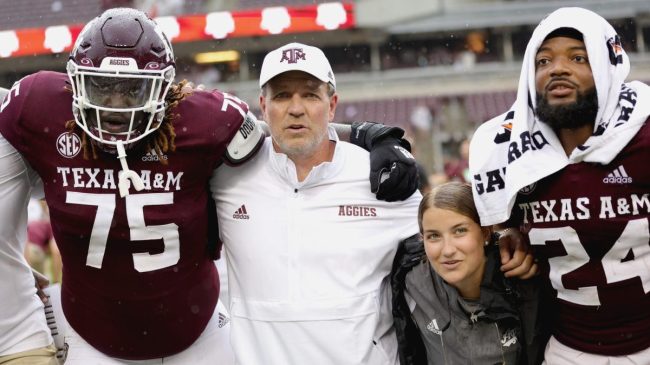 Texas A&M and Jimbo Fisher found themselves at the center of the college football universe last week. But it was for all the wrong reasons.

The Aggies entered the season with the hype train rolling full steam ahead. A loaded 2022 recruiting class and a massive NIL layout had Texas A&M inside the AP Top 10 to begin the season despite an 8-4 record a year ago.

Cracks began to show in the opening week when the Aggies scored just 31 points in a shutout win over lowly Sam Houston State. Those cracks quickly became gaping as Texas A&M lost to Appalachian State, 17-14, in week two. The Aggies reportedly paid the Mountaineers $1.5 million just to show to up.

Things only got worse from there after a video leaked from TAMU’s Midnight Yell where they made fun of App State before losing to the Sun Belt foe.

But the bleeding didn’t stop there.

Elite running back recruit Reuben Owens canceled his plans to visit Texas A&M, while five-star true freshman Denver Harris posted a video of himself recklessly speeding through a parking garage.

Fisher and Aggies will hope to right the ship against No. 13 Miami on Saturday, and they’re starting by making a major change.

Texas A&M starting quarterback Haynes King had a rough go of things in the first two weeks. The sophomore went just 33-of-51 for 461 yards, three touchdowns and two interceptions.

Now it appears he’s lost his starting job as well.

Texas A&M student newspaper The Battalion reported late Thursday night that LSU transfer Max Johnson would be the starter against the Hurricanes.

Source confirms Max Johnson has been moved up to QB1 for @AggieFootball , looking to carry the Aggies to their second win against No. 16 Miami. https://t.co/kBa1rGO3Sy

Johnson is the son of former Pro Bowl QB and Super Bowl winner Brad Johnson. His transfer from LSU made shockwaves in the offseason as his younger brother Jake, a four-star tight end in the class of 2022, also flipped from the Tigers to the Aggies.

TAMU fans are excited to get their first real look at the junior who threw for 2,815 yards, 27 touchdowns and just six interceptions a year ago.

Though some are unconvinced.

Still want to know why he couldn't beat out other buddy. https://t.co/46tzUgHvTP

When you have two quarterbacks, you don’t have one https://t.co/8l0JSLWhdo

Look at it this way Aggies fans, it can’t get much worse.