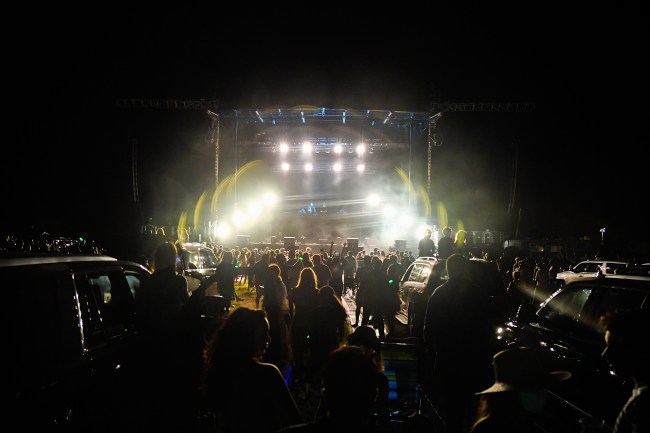 UPDATE: NYS Health Commissioner Howard Zucker has contacted Southampton Town Supervisor Jay Schneiderman about the event and it is now being investigated. Full text of the letter regarding the investigation is below.

I woke up on Sunday morning to see some tweets about a drive-in concert from The Chainsmokers in The Hamptons on Saturday night and my first thought was that it must’ve been old footage and people were getting fooled. Alas, I was the fool for giving anyone the benefit of the doubt.

You can clearly see the crowd was packed together like sardines with each light held up a person in the crowd. And the people attending the drive-in concert were reportedly paying thousands of dollars for the charity outdoor event that did make efforts to space people out but that clearly didn’t work out so well. It is pretty clever calling it the ‘Safe and Sound’ concert to project the image that it was truly safe for everyone in attendance. If this video doesn’t load you can access the tweet direct right here.

The Chainsmokers had a “Drive-in” concert in the Hamptons last night…looks like social distancing was strongly enforced 🤦🏻‍♂️….when NY gets the inevitable spike just blame these rich selfish white people

According to TMZ, people attending were given temperature checks at the gates and masks were handed out to anyone that didn’t bring their own. And there was ‘plenty of hand sanitizer’ available at the 100-acre venue. The event raised funds for No Kid Hungry, Southampton Fresh Air Home, and the Children’s Medical Fund of New York which are all great causes.

TMZ claims the most expensive ticket to the charity event was $25,000 for the “JAJA Like a Rockstar” package which included a private RV.

I’ve seen reports on Twitter that people were shelling out thousands of dollars to attend which wouldn’t shock me if we were talking about seeing The Chainsmokers in Las Vegas with bottle service but this was a drive-in event in The Hamptons and it appears as if a huge number of attendees had zero interest of staying in their cars.

It kind of blows my mind that there are people out there who are so deep into The Chainsmokers that they’re willing to fork over thousands and risk spreading the virus just to see them. A quick scroll through Instagram shows that some people were wearing masks but certainly not all of them.

This reads ‘The Chainsmokers Pave The Way Again’ and applauds their ability to put on an event with temperature checks and limited to just 3,000 in attendance which might be impressive until you take notice of how the crowd is reacting during the concert itself.

How the fuck is there a chainsmokers concert going on rn in the middle of a pandemic???

Chainsmokers throwing a festival in the Hamptons, thoughts? @sloanesayz pic.twitter.com/1v4TxpIECz

@NYGovCuomo @melissadderosa @RichAzzopardi how come you are busting and fining these small bars and restaurants in Queens but the Chainsmokers concert in the Hamptons where no one was in masks was fine with you? Gross!!

and according to Stereogum, even FuckJerry is involved so the cursedness is times 5

I’d be willing to bet the farm that we’ll see New York’s Governor Cuomo address this event at some point this week if he hasn’t already.

I guess my prediction above was pretty spot on. The event is now being investigated. Here is the full letter sent by Dr. Howard Zucker, Commissioner​ of the New York State Department of Health, to Southampton Supervisor Jay Schneiderman:

I am sure that you are aware the State of New York is in a Declared State of Emergency, since March 7, 2020 due to the prevalence of COVID-19. I know you are aware of the many efforts this state has made in conjunction with many local governments to combat it.  The Governor’s Executive Orders require social distancing as well as limitations on businesses and other activities, for instance, no non-essential gathering is permitted in excess of fifty individuals, per Executive Order 202.53 until August 20, 2020.

As Commissioner of Health,  I have also issued a number of health regulations and emergency orders to safeguard the public health and reduce the spread of COVID-19.

In that regard I am greatly disturbed by reports concerning the “drive-in” concert held in your town this past weekend, which apparently involved thousands of people in close proximity, out of their vehicles, a VIP area where there was no pretense of a vehicle, and generally not adhering to social distancing guidance.  I am at a loss as to how the Town of Southampton could have issued a permit for such an event, how they believed it was legal and not an obvious public health threat.

Please report to me within 24 hours on the following:

·      If the permit was issued, how was the permit consistent with applicable state regulations and laws relative to COVID-19?

·      If there was a permit issued, what security presence did you have planned for the concert?

·      What town officials were at the concert and why was it allowed to continue when it became clear violations were rampant?

Please be advised that all responses to these questions, are a submission to a state department conducting an investigation, and any submission will be deemed to be a sworn statement.

I look forward to your response,

This story has certainly taken an interesting turn.