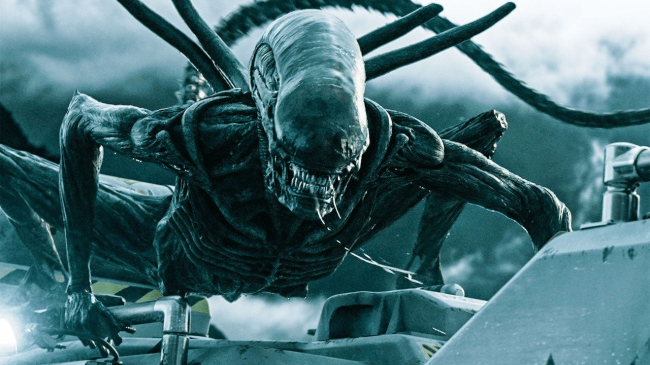 Just like with everyone who thinks Die Hard (and Iron Man 3, Gremilins, Rocky IV, et al) is not a Christmas movie, there are people on the internet incorrectly arguing over whether or not the classic sci-fi thriller Alien starring Sigourney Weaver is a horror movie.

This whole discussion began on Tuesday when a woman named Elle Hunt asked a very simple question on Twitter: “Is Alien a horror film?”

Almost 120,000 votes (and counting) and nearly 3,000 comments later, an absurd 93.7% of respondents do infact believe that Alien is a horror movie.

For her part, Hunt says that Alien is not a horror film because it takes place in space.

While I appreciate the fact that she correctly does not consider Alien to be a horror movie, the logic she is using doesn’t stand up to scrutiny.

By the way, did know that director Ridley Scott still thinks he can get squeeze some more money story out of the Alien franchise which is already at six films counting the two prequels? Because he does.

“I still think there’s a lot of mileage in Alien, but I think you’ll have to now re-evolve,” Scott told the Los Angeles Times last year. “What I always thought when I was making the first one [was] why would a creature like this be made and why was it traveling in what I always thought was a kind of war-craft, which was carrying a cargo of these eggs. What was the purpose of the vehicle and what was the purpose of the eggs? That’s the thing to question – who, why, and for what purpose is the next idea, I think.”

Here are some of the correct responses…

Science fiction. The filmmakers spent quite a lot of time creating a biologically plausible creature, so calling it a "haunted house in space" (i.e. supernatural) is really doing it a disservice. Same reason "The Thing" (original & remake) are also science fiction.

It’s sci-fi...!!!
Horror is usually people *knowingly* doing unspeakable things to other people.
The Alien is only following its natural instincts, like a lion hunting its prey.

No. Horror needs to be grounded in an earthly setting, to give you a sense that it could happen to you. Using Sci Fi as a vehicle for the story, it loses that connection. It’s just a scary futuristic film

No it's a sci-fi monster movie. Their are no ghosts, serial killers or zombies. Just because a movie is scary, doesn't make it a horror film. The movie Testament (1983) was terrifying, not a horror film.

I said no. It's a moral dilemma film. It also deals heavily with the irrelevance of stereotypes in a crisis. Horror is just a side effect...and mostly because we are being challenged to rethink our food chain supremacy.

And here are some of the THOUSANDS of reasons people gave for being wrong.

forget the fact that the xenomorph is an extraterrestrial creature (aka an alien) and just think of it as a monster.

Now, not all "Monster movies" are horror movies, but "Alien" follows all the tropes of a classic Monster horror movie.

Alien literally follows all of the tropes of a standard slasher horror film, even down to the "final girl".

People like to pretend that a good movie can't also be horror, but that's just pretense.

Is it legitimately scary? Chances are, you're watching horror, my friend.

Sci-fi is a sub genre, not a prime

Alien could fall into other categories, such as drama/thriller but it's primary category is certainly Horror

Horror as a genre is defined by the emotions it evokes. ALIEN evokes those emotions. It’s all there—rising dread, very personal stakes, jump scares, the safe place made suddenly unsafe. That it’s set in space doesn’t change any of that—horror is not defined by setting.