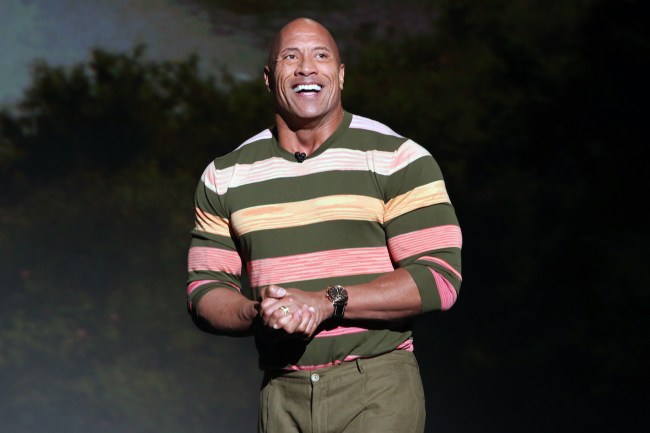 I love The Rock. Honestly, I’ve been rooting for the guy for as long as I can remember, beginning all the way back in the late 90s when the (then) WWF was at the peak of its Attitude Era. He was my favorite wrestler to such an extent that I’m *still* not over Stone Cold Steve Austin and Vince McMahon completely screwing him out of the title at Wrestlemania X-Seven. Unlike most wrestling fans, though, when The Rock made the move to Hollywood, I was gassed, as movies always held rank above wrestling in my mind.

But still, even for someone like me — someone who’s been supporting The Rock for two decades now — the line needs to be drawn somewhere, and this Red One project at Amazon Prime sounds like the perfect place to draw the said line.

According to The Hollywood Reporter, Dwayne Johnson is set to star in the holiday action-comedy Red One over at Amazon Prime. While specific plot details are being kept under wraps, sources told THR that the project is “Santa-centric”.

Sounds all well and good, right? Well, here’s where things take a turn, as both Amazon Prime and Johnson’s Seven Bucks Production company see the franchise as a “unique concept that represents a property that could encompass not only a tentpole film but could reach beyond entertainment across multiple industries and businesses.” Furthermore, “sources said the businesses could include the gift-giving enterprises that thrive during the holiday season (and that, of course, includes Amazon and Amazon Prime).”

Hiram Garcia of Seven Bucks wrote the treatment for the unique Christmas-themed feature project that seems to offer the possibility of branding and business opportunities not just for the streaming side of Amazon but the e-commerce side as well.

“Seven Bucks Productions is a leader in creating unique and compelling entertainment for the entire family, and we know Red One will continue that tradition,” said Amazon Studios head Jennifer Salke. “Hiram’s concept and the world he’s envisioned are uniquely original and we are so excited to team with Seven Bucks Productions and Chris Morgan to help bring it to life. Red One is just the first step in what we know will be a successful, collaborative venture.” [via THR]

Basically, Red One sounds as though it’s going to be a 100-minute-long marketing push. A feature-length commercial. A capitalist nightmare come to life.

At this time, Red One — written by Fast & Furious franchise scribe Chris Morgan — is aiming to begin production in 2022 ahead of a 2023 release date. Take your time on this one, Rocky.