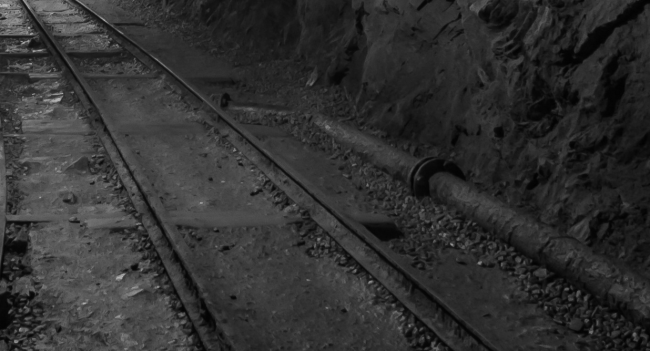 Trap doors in vacation houses. Private prisons in a home’s basement. Outlines of a dead body underneath a room’s carpet. A hidden basement and a bunch of secret cameras. Those are just a few of the creepy things people have discovered in houses and then shared on TikTok this year.

Now we can add an abandoned railway in an underground cave a TikToker discovered after descending 30 feet beneath his house using a creepy stairway located in his basement.

The woman who shared these videos to TikTok, Maya (@moodycakes), filmed their scary adventure after her cousin Steven found a concrete cave in his basement and she decided to visit him in Harrisburg, Pennsylvania to check it out.

Her first video, which has now been viewed over 15 million times, shows her and her cousin entering the cave through a door with a sign next to it that reads, “Enter cave at your own risk.”

“I think it’s like a safe place, the underground railroad is like 30 feet underground,” Steven says as he shines a light into the cave.

“I don’t want to go down there, are there any ghosts?” Maya asks.

After assuring her that there aren’t any ghosts, Steven tells her, “Unfortunately, the two lights down there were out so be careful. This is some Indiana Jones sh-t.”

As he waits for her to come down the stairs, Steven also tells Maya all he has seen in the cave are bricked walls and some abandoned railroad tracks.

In a follow-up TikTok video, Steven shows her around some more and explains and describes the different kinds of bricks in the walls.

A third video, which she shared in full on YouTube, down inside the cave, Steven explains that he has had an architect examine the space, explaining how it could be utilized in case of a nuclear event, as well as the fact that it had been used to transport and store beer barrels before Prohibition.

During Prohibition, the cave, he says, was used as a underground bar. Several commenters agreed that it looks similar to other beer catacombs and tunnels at historical breweries they have seen or visited.

He also mentions that a rather foreboding door in the cave, which he won’t go through, supposedly at one point led to a whole “underground world.”

Numerous viewers who watched her videos on TikTok quickly became hooked by the stories and wanted to know more.

“What in the Lovecraft Country is going on here?” asked one TikToker.

“Imagine y’all wake up and that door is open. I would just die then and there,” wrote another.

“Please update on what used to be beyond that door,” begged another viewer.

Maya did say in a reply to one commenter that she will be checking with the Harrisburg Historical Society to see if she can find out more about the cave, so stay tuned.