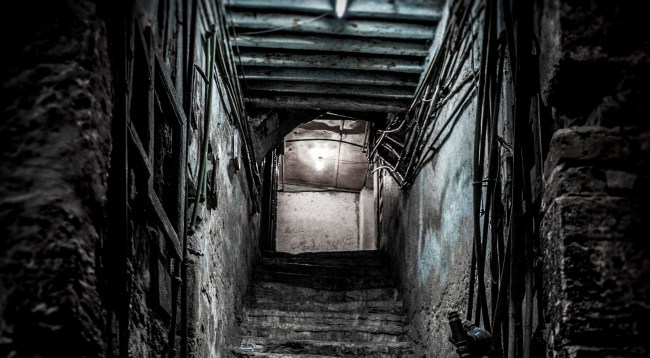 What… is going on… with people discovering secret rooms hidden behind vents, mirrors, and the floor?

Over the past four days, we have had a guy staying at an Airbnb in Richmond, Virginia find a “hidden room” behind a vent that he heard noises in after feeling like he was “being watched,” and a woman discovering a hole behind her bathroom mirror that revealed what looks like freaking torture chamber.

Of course, both of these creepy discoveries were chronicled on our new home for everything important: TikTok.

TikTok also just happens to be where a third person chronicled finding a hidden basement in her new home with a bunch of security cameras installed in various rooms around the house with wires leading downstairs.

The woman who goes by the handle @vtmegs explained that she and her husband had rented this house after just a 20-minute viewing. Bet that won’t happen again.

In her TikTok video, she says, “Alright so we just rented a new house and we have this pantry and we’re wondering why the pantry door has got these locks, because it’s literally just a closet.

“And so I open the door and noticed what looks like a hatch in the floor.

“I am legit freaked out by this because they did not mention a basement or anything in the listing, so I’m gonna open this.”

She then opens up the hatch to reveal a set of stone steps leading down into … hell?

Later, she posted a follow-up video after so many viewers bugged her wanting to know what was under the house.

“I actually made my husband go down here last night because I could not sleep, not knowing what was down here,” she said.

Reply to @joshseville0 okay okay. Locks are a bit much for this. If it's for kids they must be the hulk. My 6yo definitely can't open the hatch

At least the security cameras were not plugged into anything. Bright side!

Also, because internet, her terror was conveniently turned into a funny meme video. Bonus!

But seriously, what is with all of the cameras? What was going on inside that house to make someone install so many in different rooms? And why would they all lead to that tiny little room under the house? Someone obviously didn’t want them to be discovered.