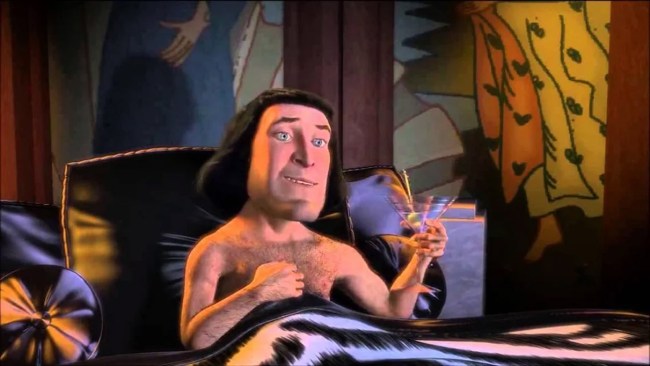 If you don’t want your fond memories of the movie Shrek permanently ruined forever, then you might want to stop reading right here before your brain is scarred with this new information.

For the rest of us I refer you to TikTok user @Kathy_Martinez05 who has decided to have a little fun passing the time by creating videos about “childhood films filled with adult jokes.”

As we all know, there have been many times where someone slipped a little adult humor into a kids movie or TV show just to give the parents something to laugh about that goes right over the youths’ heads. SpongeBob SquarePants, for instance, does this quite often.

Martinez is well aware of these fun little Easter eggs and so far has made 18 popular TikTok videos covering everything from Frozen to Angry Birds to Toy Story.

For one of these TikTok videos, which has now been watched over 8.5 MILLION times, Kathy took a look at the monster hit 2001 film Shrek and in particular the scene in Shrek featuring Lord Farquaad (voiced by John Lithgow) just chilling in his bed without a shirt on (or pants?).

“Mirror, mirror, show her to me. Show me the princess,” orders Lord Farquaad.

The mirror, with a disgusted look on its face, then flashes to an image of Princess Fiona looking sadly out of the tower window.

“Ah, perfect,” says Farquaad, who then winces and looks guiltily at the camera.

Why did Lord Farquaad look so guilty? That’s where @Kathy_Martinez05 and her TikTok video comes into play.

As she points out, in great detail, as Farquaad sees the princess in the mirror then sips on his drink and says “Ah, perfect,” the zebra-print sheets appear to rise up a little bit near his *ahem* groinal area (technical term).

It also doesn’t help matters when he then proceeds to take a quick peek under the covers.

“Did anyone catch that?” Kathy asks in the caption.

Yes, Kathy. Everyone caught that.

Did anyone else catch that? ##fyp ##foryou ##Shrek ##adultjokes ##adulthumor ##childhood

“When I was younger I thought he spilt his drink,” wrote one viewer.

“Why? Why did they do that? Who agreed to animate that? Hello?” cried another.

“The 1 percent of innocence I had, just left my soul,” wrote another.

“I will never forgive you for this,” scolded another viewer.

I guess now we know why the mirror looked so disgusted by Farquaad’s request. He knew what was going to happen.

Of course, @Kathy_Martinez05 is far from the first person to take notice of Lord Farquaad’s “tower.”

Just a couple of years back, Redditor HermanHermann also tried to “enlighten” everyone about Farquaad pitching a zebra-striped tent when he saw Fiona.

As Redditor iliketumblrmore wrote back then, “Shrek makes a jokes when he sees Farquad’s huge castle -“Do you think he’s compensating for something?”, guess that was true huh. Wait, Do you think Fiona knew this and married Shrek for that monster Do**?”

Annnnnnd just like that… wait… yep, I am going to have to go back to therapy.