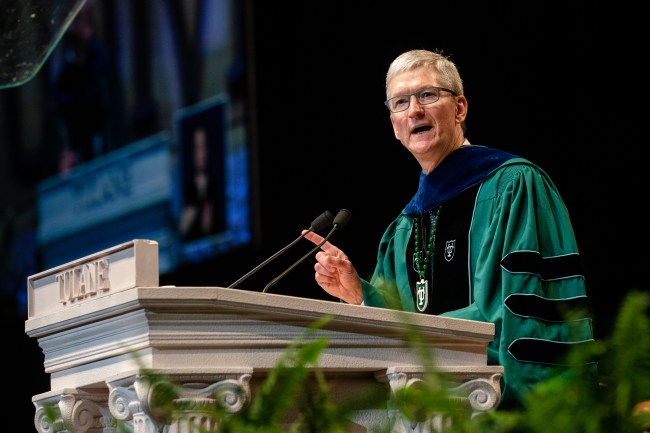 Attention lazy millenials and entitled Gen-Zers: The pressure is off. It’s not your fault.

At least according to Tim Cook.

On Saturday, the Apple CEO delivered a commencement speech at Tulane University, during which he blamed Baby Boomers like himself for climate change.

“My generation has failed you,” he proclaimed in his fiery address.

Cook went on to lambaste boomers for their strict adherence to partisan politics when they could have been fostering solutions.

His diatribe did not stop there. He assigned a bit of homework to the recent graduates, challenging them to clean up the messes that boomers left behind.

Hold on. Tim, aren’t you worth just shy of a billion dollars? It’s real convenient of you to pawn this off on the only generation with virtually zero savings. I’m not saying we can’t do better, but it seems like you’re trying to pass the buck here.

Leave it to the guy sitting atop America’s first trillion dollar company to tell a twenty-one-year-old to “remake the world” before the kid’s landed his first job. Let me get a roof over my head first.

"You may succeed. You may fail. But make it your life’s work to remake the world…Because there is nothing more beautiful or worthwhile than working to leave something better for humanity." – Tim Cook #tulane19

I know commencement addresses are supposed to be inspiring appeals laced with courageous calls to action, but you’re talking to a crowd of 1,600 students buried in debt who can’t find work. Anyway, you just said this whole climate change debacle was your fault. Let’s show some accountability here.

I recycle. I pay my taxes. And, yeah, I’ll occasionally donate when I care enough about an issue. But where does this guy get off telling me to change the world?

Hit the drawing board, Tim. I’m not cleaning up your mess.