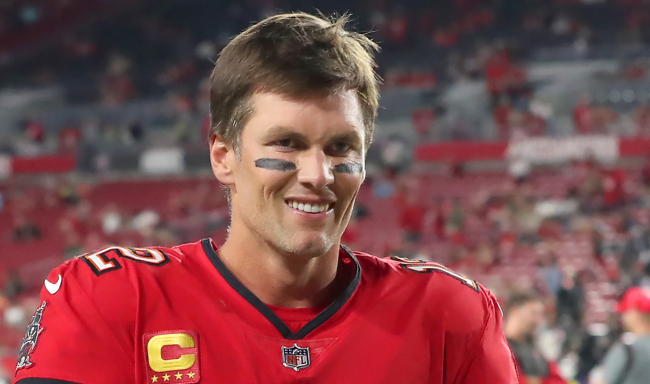 Tom Brady may be having a bit of a rough time in his personal life, what with his divorce from Gisele Bundchen and that whole FTX lawsuit and investigation he’s facing. (Not to mention his weird beef with Antonio Brown posting a fake naked pic of Gisele and his being exposed for having a terrible charity.)

On the plus side for TB12, thanks to said divorce, he has a whole slew of single ladies looking to hook up with him. (I’m sure it has nothing to do with his fame and wealth.)

Shortly after his divorce was announced, Brady received overtures from a former Playboy playmate, a Brazilian model, and a college sports reporter.

Karin Hart, another popular golf influencer, beat her to the punch, however.

“I’m just sitting here in my house stretching and looking at Instagram. And I started stalking Tom Brady’s page and I think I’m in love with him,” Hart said in an Instagram story last month.

Now there is another potential suitor for the 45-year-old Buccaneers quarterback.

Her name is Veronika Rajek and she’s definitely not being shy about her interest in him.

The 26-year-old, born in Slovakia, has apparently taken to our American version of football.

“I saw the LEGEND and if somebody asks me again if I love Brady, yes I love him, and show me somebody who doesn’t,” Rajek captioned the photos of herself in the jersey. “Even his haters love him because they know he is the goat. @tombrady thank you for an amazing show.”

With a whopping 3.2 million followers on Instagram, Veronika Rajek most certainly isn’t hurting for guys to date.

She also has claims that her body is “too dangerous” for the internet.

“My body is considered a danger on social media, and I am constantly being cancelled by trolls for doing absolutely nothing but sharing photos of my body,” she said in October. “These days, you see a lot of overweight or even obese women online talking about body positivity, but when a beautiful, tall woman wants to be positive in her own skin, people want to attack me and call me privileged.”

Shame on all of them.