Tom Cruise Is About To Set A Massive Record With The Release Of ‘Top Gun: Maverick’ 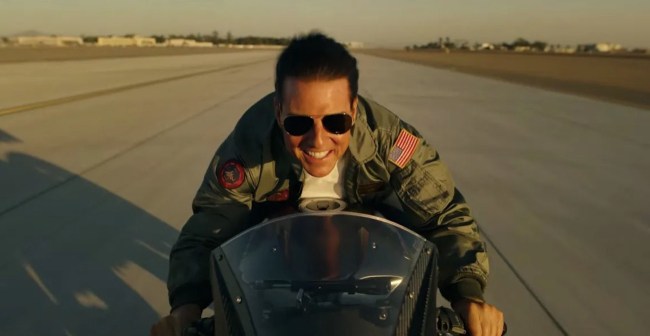 It appears as though the years of delays that Top Gun: Maverick has suffered through will have been worth it, as the film — which officially hits theaters on Friday — is currently soaring on Rotten Tomatoes with an astounding 97% critics score on Rotten Tomatoes after over 175 reviews.

Not only is the long-awaited sequel to Top Gun a hit with critics and fans, but it’s shaping up to be a heavyweight at the box office, too, as reports indicate the film could make around $180 million in its opening weekend, which would be the best of Tom Cruise’s four-decade-long career.

The reason estimations for Top Gun: Maverick’s box office are so high, according to Deadline, is because industry experts consider it to be a “five-quad” movie (the report doesn’t bother to explain either). While I’m not sure what the hell the fifth quadrant is, a “four-quad” movie is a phrase used when a film appeals to both men and women, and the old and the young.

Top Gun: Maverick projected to make around $180 million in its opening weekend

After holding what is one of the most anticipated sequels in decades due to Covid, Paramount finally roars its engines on its Tom Cruise feature Top Gun: Maverick in what is not only expected to be the 3x Oscar nominee’s best worldwide opening of his career at $180M, but also a record for him stateside with at least $92M-$100M+ and what also looks to be one of the top ten debuts over the 4-day Memorial Day weekend.

Awareness around the globe is sky-high, and though tracking stateside shows older men being dominant, the hope here is that Top Gun 2 is a ‘five-quad’ movie as those in the industry call an aggressive overperforming title. [via Deadline]

In addition to Cruise, Top Gun: Maverick stars Miles Teller, Jennifer Connelly, Jon Hamm, Glen Powell, Lewis Pullman, Ed Harris, and Val Kilmer. Make sure to keep your eye out for our full interview with Jon, which will drop closer to the release of the film.

Ahead of the film’s release, we had the pleasure of speaking with Jon Hamm about the project, so make sure to check that out below.

INTERVIEW: Jon Hamm On Why ‘The Town’ Is So Beloved More Than A Decade After Its Release (Exclusive)