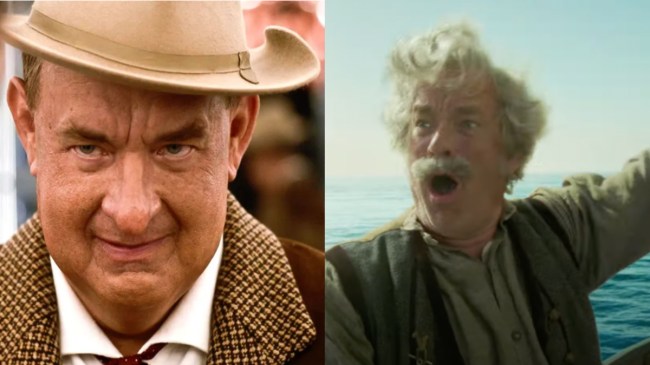 Earlier this year, after coming across a Twitter ad for his latest fake-seeming film A Man Called Otto, I made a deeply troubling discovery: Tom Hanks is in the midst of what might be the worst stretch of his widely-acclaimed career.

Ever since his Academy Award-nominated performance as Mr. Rogers in 2019’s A Beautiful Day in the Neighborhood — which is solid albeit formulaic and safe — Hanks has starred in six films, with not a single one of them making a cultural impact (except for Elvis, but we’ll get to that): Greyhound, News of the World, Finch, Elvis, Pinocchio, and the aforementioned A Man Called Otto.

what the hell is going on here? pic.twitter.com/abRgIJbse6

Clearly, I’m not the only one who’s been off-put by Hanks’ recent film output, as the legendary two-time Oscar winner has been nominated for TWO Razzies this year for his work in Disney’s diabolical Pinocchio and Baz Luhrmann’s overwhelming Elvis (which is watchable because and *only because* of Austin Butler’s transformative performance).

Also landing multiple noms are Tom Hanks and Pete Davidson, who are both up for worst actor and worst supporting actor. Hanks was cited for his portrayal of Gepetto in Disney’s Pinocchio and his “latex-laden, ludicrously accented portrayal of Col. Tom Parker in the otherwise critically acclaimed Elvis.” [via The Hollywood Reporter]

In case you’ve never heard of them before, the Razzies (a.k.a. the Golden Rasberry Awards) are essentially the inverse of the Academy Awards as they nominate the worst films/performances of the year.

Luckily for Hanks and fans of his work, his next movie will certainly be his best in a couple of years as he’s set to feature in Wes Anderson’s star-studded project Asteroid City alongside the likes of Margot Robbie, Scarlett Johansson, Bryan Cranston, Edward Norton, Adrien Brody, and many more.

As for some other notable Razzie nominees, the perpetually-awful Jared Leto was nominated for Worst Performance courtesy of his work in Morbius, while Andrew Dominik’s wildly-controversial Marilyn Monroe film Blonde led the way with eight nominations.

RELATED: Tom Hanks Believes He’s Only Made ‘Four Pretty Good Movies’ – Here’s What We Think They Are

You can check out all of this year’s Razzie nominees below. The winners will be announced on March 10, which is the day before the Academy Awards.