People Sat In Traffic Without Moving For 40 HOURS In Japan 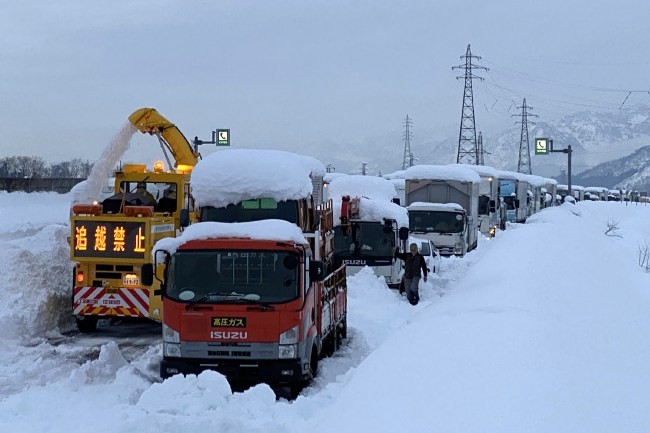 Humor me: try to recall the worst traffic jam you’ve ever been part of in your life. Maybe you can’t think of a specific instance but you have a place in mind. Got it? Now, try this one on for size:

More than 1,000 people in Japan spent Thursday night stuck on a highway in their cars, waiting out a traffic jam with little food or water during a heavy snowstorm.

The jambegan after a car got stuck in deep snow in the middle of the highway, grinding traffic to a halt, according to the Nippon Expressway Company (NEXCO), the country’s highway operator.

Traffic built up on the stalled highway; at its peak on Thursday night, the jam stretched to 15 kilometers (about 9.3 miles), NEXCO told CNN. Some segments of the long traffic line were able to move slowly with starts and stops, but some motorists remained stuck in place for more than 40 hours.

Forty hours in your car at a dead stop. Snow piling up until the windows are covered. No chance of moving anywhere. Definitely puts that four-hour nightmare I had heading out to the Hamptons on the Friday of 4th of July weekend in perspective.

What do you do? You can’t walk anywhere. You don’t have a choice; you have to stay in your car. 9 miles of traffic needed government assistance! Water and food and bathrooms. Which brings us to our next point: before that help arrived, were people just dumping and peeing by hanging out of their cars? If something like this happens, do we all look the other way? Polite society be damned, the rules are out the window, grab my hand and squeeze one out, friend.

The jam started on Wednesday and authorities are saying that the roads might not be cleared until SATURDAY. Good God! Seriously, what do you do? I don’t care if you’re in a Maybach; being in a car longer than five hours is HELL. And that’s in good weather! Do you know how many books on tape you could listen to between Wednesday-Saturday? How many episodes of this tremendously hilarious and interesting podcast, Oops?

(This feels like the wrong story in which to plug our podcast. Hand up, my awareness is really low these days.)

In any case, here’s hoping the snow stops soon for these poor souls. I don’t want to feel guilty when I moan about the misery of inching through Southampton again this summer.