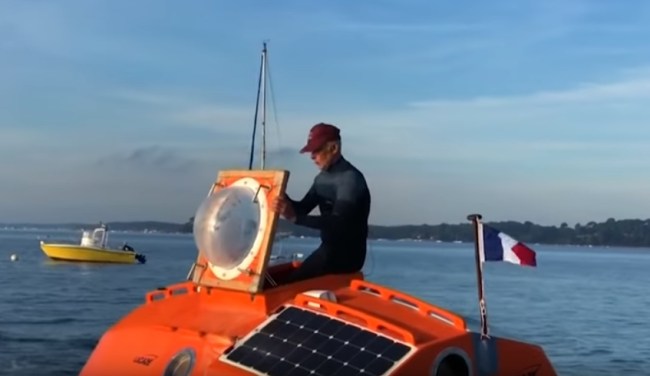 What are your grandiose New Year’s Eve resolutions? Maybe hit the gym to lose weight and give up after two weeks? Maybe have a dry January and give up after two weeks? Well, Jean-Jaques Savin plans to make his 2019 epic and he has no choice but to follow through with his incredible journey. The French adventurer is crossing the Atlantic Ocean in a barrel and will only use currents to get him to the Caribbean.

The 71-year-old Savin built his own vessel that is pretty much an enlarged barrel. The barrel has no sails or engine and will utilize currents in the Atlantic Ocean to take him from the Canary Islands off the coast of Africa to the Caribbean. The currents are projected to propel the barrel about one or two miles per hour so the jaunt should take him about three months.

Inside his 10-foot-long “ship,” there is a kitchen, a bed, and limited space to carry his supplies including a bottle of white wine for New Year’s Eve as well as a bottle of red wine and foie gras for his birthday in January. There are portholes on the sides and on the floor so he can observe ocean life. On the outside, there are solar panels to power his equipment. Savin will be able to exit the barrel to swim and go spearfishing. Yeah, you go swimming in the middle of the ocean as your barrel floats away. Good luck with that.

Savin, who is a retired military parachutist, raised $68,000 to finance his transatlantic trip. Savin will be releasing markers on his journey so the French oceanographic organization JCOMMOPS can study ocean currents. You can also track Savin’s progress on his Facebook page.

When asked why he is doing this he said, “Maybe to prove that I’ve still got it.” That “it” could be bravery, ignorance, or too much time on his hands.