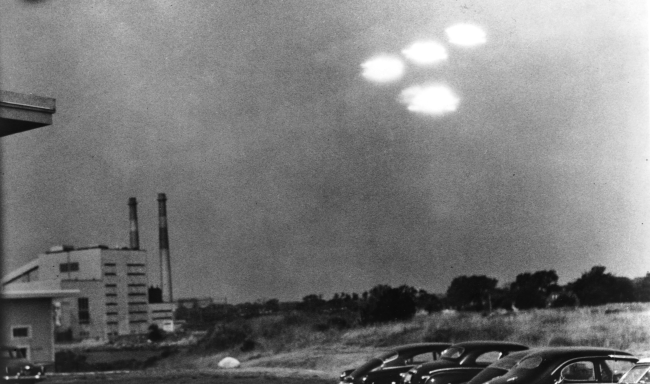 One of the great benefits of today’s technology all of the new data we have been able to acquire when it comes to discovering and investigating UFOs.

More people than ever have access to UFO footage, photographs and reports that were previously unavailable because of either lack of access or the inability to capture it.

Case in point, 43-year-old Matt Doughty from Hertfordshire in England was recently able to share some video, taken from his doorbell camera, that appears to show a triangular-shaped UFO flying around his home.

This triangular UFO was made up of three bright lights which moved slowly from right to left above the homes in the area.

Doughty came to possess this UFO footage as he and a friend, Kevin, were watching a football on TV, and he received a notification from his doorbell camera that there was someone outside his house.

Wondering what was going on, Matt replayed the footage and realized that whatever was in the sky had triggered his doorbell camera to ping him.

“I was sat with my friend and said ‘blimey, I didn’t hear the doorbell go but I’ve got an alert come up,” Doughty told the Mirror.

“I looked at the footage and played it back. It was silent. Three lights came from the sky and I thought it was really weird.

“Where it’s come through the trees, it’s come over the house opposite me then the footage captures it coming from right to left. It disappears over the top of woodland to the left of my house,” he continued.

“It was a bit of a chilling feeling really – I thought ‘oh my god, that’s quite close.’ I wondered if I’d discovered something nobody knows anything about.

“When I showed Kevin he said ‘jeez, that looks like a UFO’.”

Matt, a logistics manager, then contacted his father, who he says is an aviation buff to see if he could make anything of the footage.

After checking a flight tracker online, Doughty’s dad informed him that there was “no plane traffic” in the area at all.

Related: Circular, Glowing UFO Hovering In Sky Caught On Camera By Student Before It ‘Just Disappears’

This is far from the first time UFOs with this sort of appearance have been reported in the United States.

One example can be seen above in the top photo which shows four brightly glowing, unidentified objects appeared in the sky at 9:35 a.m. over a parking lot over Salem, Massachusetts way back on July 15, 1952.

More recently, a trio of glowing lights was observed and recorded over North Carolina, one of America’s hot spots for UFO sightings.