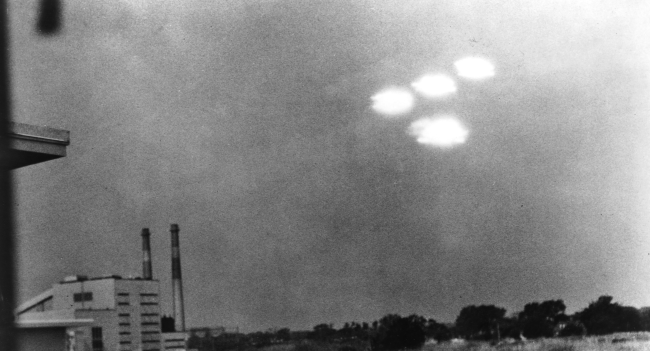 On Thursday, in news potentially related to UFOs, a NASA sponsored report by the National Academy of Sciences, Engineering and Medicine, stated that the search for alien life is the top priority of astronomers in the next ten years.

“The coming decades will set humanity down a path to determine whether we are alone,” the report stated.

Based on much of the recent UFO and alien news, it’s understandable why they would want to take such a hard look at the issue.

One of the more interesting stories of late with regard to people witnessing UFOs comes to us from someone who says they were a passenger on a recent Jet Blue flight from Boston to Jacksonville.

The incident report, filed with the National UFO Reporting Center (NUFORC), notes that the organization “spoke at length with the witness, and consider him to be exceptionally capable, and credible.”

It begins, “In full disclosure, I have been a licensed private pilot for 24 years, and a licensed drone pilot for 6 years. Typically when I fly commercially, I tend to book a window seat… on an exit row. On this flight, I was sitting in Row 12, window seat – exit row, on the left side of the aircraft. The jet configuration was two seats on the left, an aisle, and two seats on the right.”

The witness goes on to state that at approximately 12:35 p.m. they had just entered the “pattern” for landing at Jacksonville International Airport, heading due west at approximately 2,800 feet in the air, traveling at roughly 240 MPH. Visibility was very clear.

“Flying over this part of the pattern is a thick, heavy forest. In August, the leaves on the trees are very dark green,” the witness continued.

“As I looked out the window, facing west, I saw three bright white objects flying in the opposite direction. I didn’t know what they were.”

The witness says the UFOs he saw were definitely not birds or drones.

“As they got closer, they were three long cylindrical objects. They were in a triangle pattern. They were roughly 75 feet to 150 feet above the tree line. I was above the objects. I was completely stunned what I saw. It was crystal clear and their white fuselage stuck out against the dark tree line.

“I could clearly see these ‘aircraft’. They were all white, I am guessing about the size of 2 or 3 cars (20 to 25 feet long)… maybe a bit longer. The width was about as wide as a car. They clearly had a rounded front fuselage, and a rounded rear – everything looked completely smooth. All three were the exact same size – and they were flying in a perfect triangle. These three had NO wings, NO rotors (blades), and absolutely NO exhaust. I could not see any windows.”

This UFO encounter reportedly lasted 10 to 15 seconds as once the objects flew past his Jet Blue flight they were out of his field of vision.

“I was completely stunned! After the flight, the captain of our plane was standing in the aisle outside of the cockpit. I stopped and asked him if he noticed anything on radar right before he turned the base leg. He said he did not notice anything.

“As I got into my vehicle, I was so upset that I pulled over and contacted the Jacksonville Control Tower. They took my information, and took a report. I told two people in the control tower what I saw.”

The witness says he also contacted Naval Station Mayport and left two messages, one with a Lieutenant of Air Operations.

“To say that I am upset with what I saw is an understatement,” the witness added. “Aeronautically speaking, what I observed is not possible. BUT I SAW IT!”

Of this there is little doubt as sightings such as this has been happening for decades and with more and more frequency of late.