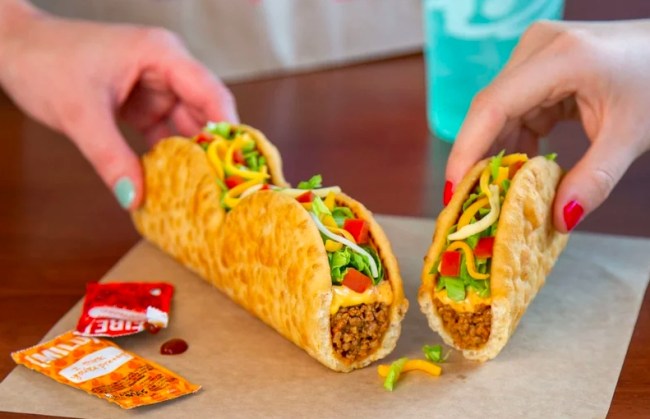 In recent years, culinary pioneers like René Redzepi, Grant Achatz, and Guy Fieri have continually pushed the boundaries when it comes to what food can be but there’s one unnamed group of individuals who don’t get the credit they deserve: the people in the test kitchen at Taco Bell.

America’s favorite Mexican restaurant has been challenging the status quo for years by dreaming up fantastical versions of more traditional fare, whether we’re talking about putting Pop Rocks in burritos or making a taco with a fried egg for a shell.

The innovators at Taco Bell have a lot in common with the scientists in Jurassic Park; they seem far more concerned with whether or not they can that they never really stop to think if they should.

Thankfully, nobody (at least to my knowledge) has been torn to pieces due to one of their food experiments gone wrong.

It’s been a little while since Taco Bell has truly disrupted the fast food game but now they’re back in a big way thanks to the Triplelupa, which—if you can’t guess by the name—is like a chalupa… but three of them.

According to Food and Wine, the restaurant initially tested out the Triplelupa in California before recently unleashing it upon the people of Minneapolis, where it’s currently being sold for $3.49.

Here’s what you can expect:

Each section of this crazy triple-length shell is filled with seasoned beef, a three-cheese blend, lettuce, and tomatoes.

But then the “triple” part really kicks in: One end has nacho cheese sauce, the other end has chipotle sauce, and the middle shell has the two sauces overlapping. As a result, you’re supposed to be able to rip the three sections apart into three distinctly different flavored chalupas.

It’s unclear if Taco Bell has any intention of expanding into other markets but I’m kind of disappointed they didn’t roll this out before the Super Bowl because I am of the firm opinion party subs are severely overrated.