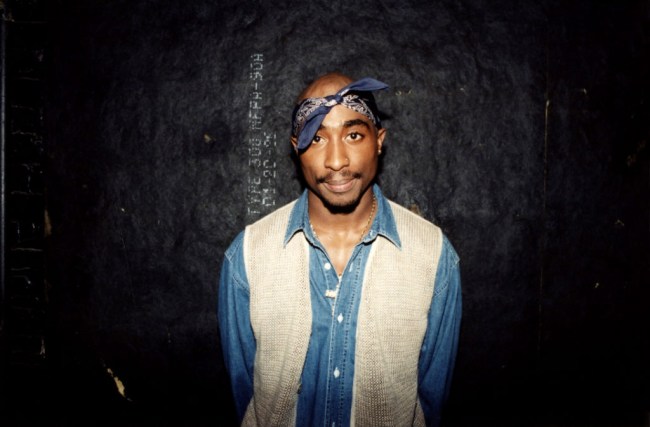 Because of the shadowy circumstances surrounding his death, there are many conspiracy theories claiming that Tupac Shakur is still alive. Now an alleged never-before-seen photo and video reportedly show Tupac “alive,” years after he was supposedly shot to death.

On the night of September 7, 1996, Tupac Shakur was shot four times, twice in the chest, once in the arm, and once in the thigh from a drive-by shooting on the Las Vegas strip following a Mike Tyson heavyweight fight at the MGM Grand. Six days later, Tupac died from his gunshot wounds on September 13, 1996. However, a new conspiracy theory says that Shakur was never murdered and never died from his injuries from the lethal shooting.

A new video from someone alleging to have personal connections with people close to Tupac’s family says they shared previously unseen photos of the beloved hip-hop icon. The YouTube channel Wired Up TV shared a video with a photo that they claim to be Tupac. The account alleges that the new photo of Tupac was taken in 2002, when he would have been 31-years-old if he was still alive. “They’ve been telling me about this picture for a while now and that he would actually go out on the limb and put his name behind it and say, this is Pac.” the video claims.

“This is the one that I can 100% guarantee you that somebody close to him vouched for it that this is him,” the narrator says of the 2002 photo of Tupac. “These pictures here are gonna get put out and everything that we talk about will be heard.”

“This picture was sent to his family to let them know that he was alright,” the video alleges. “As you can see he may be a little scrubby and stuff like that.” The man in the photo does bear similarities of 2pac, born Lesane Parish Crooks. 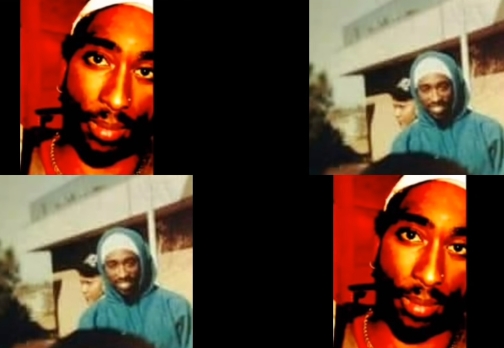 The video takes the conspiracy theory to another level and claims that Tupac changed his religion from Christianity to Islam. “You’ve heard Mopreme (Tupac’s older step-brother) and other people say that he was getting very religious by the end of ’96,” the video says. “And right here, to me what it looks like he’s a Muslim and he might have a (Taqiyah) Muslim cap on. But you know, I might be wrong. I’m just saying what has been set out there.”

Remember, this is the same Tupac Shakur who has a giant cross tattoo on his back.

So Tupac actually taught me about Nat Turner. How you ask? His back tattoo. "Exodus 1831" is a reference to him. pic.twitter.com/TofStvibpW

Mopreme Shakur AKA Wycked, was a member of the hip-hop group Thug Life and The Outlawz, where he went by the stage name Komani. In a 2015 interview with DJ Vlad, Mopreme said he is able to deal with the untimely death of Tupac, who died at the young age of 25. The old school rapper says Tupac makes him smile because “he did everything he said he was going to do, every motherf*cking thing he said he was going to do. It’s just a shame we lost him so early, but I think in his spiritual realm and in his inner clock, he knew he was going to go early.”

Mopreme doesn’t believe that Tupac is alive today because he said he smoked Shakur’s ashes. Tupac was quickly cremated a day after he died under suspicious circumstances. Morturary records show Tupac was cremated on September 14, 1994, and that he was 6-feet-tall and 215 pounds. Tupac was nowhere near that weight and his driver’s license states he was 168 pounds and standing at 5’10”. The cremator reportedly wrote the incorrect social security number of the deceased Shakur. Soon after the cremation, the cremator retired and was never heard from again.

Mopreme said he smoked Tupac’s ashes in a blunt with chronic at a penthouse. “There was a few of us in the room and we smoked, it seemed natural, it seemed what was supposed to happen,” Mopreme said. “It was just like smoking some weed, but I was emotionally f*cked up,” Mopreme explained. “The important thing we was just trying to do what he wanted us to do, that meant something that we were doing something he wanted us to do.”

In the song Black Jesuz, a collabo with Tupac and The Outlawz that was released December 21, 1999, Tupac said he wanted his ashes to be smoked. “We die clutchin’ glasses, filled with liquor bomblastic, Cremated, last wishes n***s smoke my ashes.”

Wired Up TV also posted a video of Tupac that is allegedly from 1998, two years after Shakur was said to have been shot dead. Tupac, who also went by the name Makaveli (Which if you rearrange the letters spell out “AM ALIVE K”), is allegedly seen in this darkly-lit footage.

Members of the rap group Thug Life were asked why so many people think Tupac is alive. “Because he’s a legend. It’s out of the love, if you ever lost somebody that you really, really loved, you can’t believe it. With him not being here, it’s hard for them to accept that. They refuse to accept it. In their mind he’s still living somewhere.”