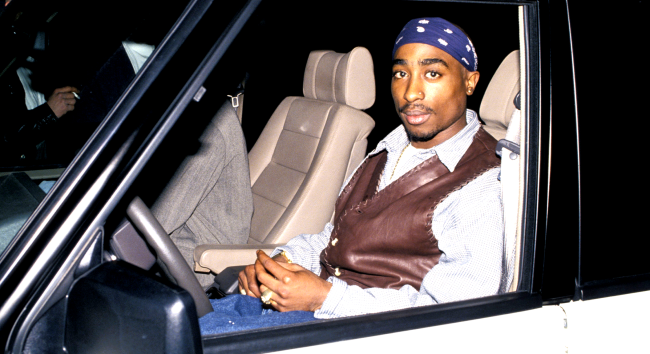 On November 30, 1994, in the midst of his criminal trial over the November 1993 sexual assault of a 19-year-old woman named Ayanna Jackson in his hotel room, Tupac Shakur was attacked and robbed by three men and ended up being shot.

After arriving at Quad Recording Studios in Times Square to record a verse for James “Jimmy Henchman” Rosemond’s client Little Shawn, Tupac, along with three associates were confronted by three men in army fatigues.

This was fashion from Brooklyn — Biggie’s home — so Tupac assumed they were with him. He felt better about the situation when Biggie’s affiliated rapper Lil’ Cease yelled down to him that Biggie was upstairs recording. Puffy was there, too.

But before Tupac’s crew could get on the elevator, the men in army fatigues drew 9mm guns and ordered them to the floor. Instead, Tupac reached for his own gun. He was shot, beaten, and robbed of his jewelry. He played dead, and the assailants left, at which time he staggered into the elevator and rode it upstairs. When the doors opened, he saw a group including Puffy, Biggie, and Henchman. Tupac said the crew looked surprised and guilty, but Puffy claimed they showed him “nothing but love and concern.” Tupac believed the incident was more than a random heist. “It was like they were mad at me,” he said. He claimed to have taken five bullets, including shots to the head and through his scrotum, though forensic evidence suggested he likely shot himself.

Later, in a 1995 interview with Vibe, Tupac accused Henchman, Sean Combs and Biggie of setting up or having knowledge about the 1994 shooting – something he reportedly believed until his murder in 1996. Especially after Combs and Biggie released the song “Who Shot Ya?” in 1995.

Related: Man Connected To Tupac Shakur Claims The Rapper Faked His Own Death, Fled To New Mexico After Shooting

Now, the gold crown medallion Tupac was wearing when he was shot in 1994 at Quad Studios, and was dented by one of the bullets in the shooting, is up for sale.

Back in 2018, the gold medallion was among several items donated to Temple University by Goldin Auctions.

Auction house Moments in Time is now selling the historic medallion, but it’s not up for auction.

Tupac’s crown medallion instead is being sold for a set price of $125,000.

This isn’t the first time the gold medallion has been up for sale at that price, however. It was also being offered for purchase at that same price back in 2016.