Man Connected To Tupac Shakur Claims The Rapper Faked His Own Death, Fled To New Mexico After Shooting 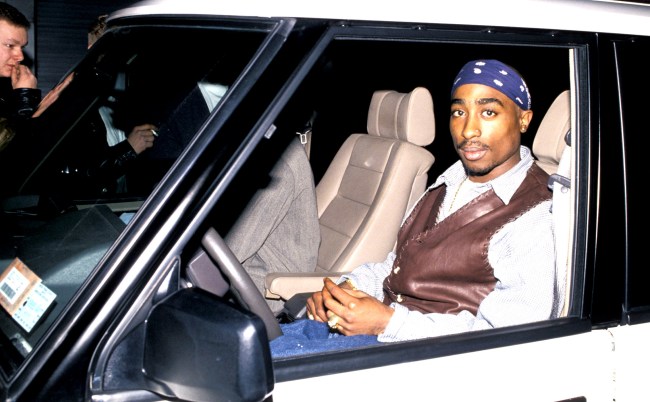 Here’s something you’ve probably never heard before. Someone is claiming that Tupac Shakur is not really dead.

This time it’s Las Vegas valley filmmaker Rick Boss who is making the claim that the legendary rapper is still alive.

Despite reportedly being shot in 1996 in Las Vegas and official records stating Tupac died at the age of 25 while being treated for his gunshot wounds at the University Medical Center, Boss says that in reality the rapper fled to New Mexico where he has been living off the grid for the past 23-plus years.

He even intends to prove his case with a new film titled 2Pac: The Great Escape from UMC.

“This movie is about Tupac actually escaping from University Medical Center here in Vegas and relocating to New Mexico,” Boss tells KTNV-ABC 13. “Getting protection from the Navajo tribe.”

Boss claims Tupac knew there was a hit on him planned for the night of the fight he was attending in Las Vegas. So he arranged for a body double to appear in Suge Knight’s BMW while he escaped town in a private helicopter so he wouldn’t be seen in a public airport.

“When certain FBI agencies are looking for you, the first thing they are going to do is block the airport. So you can’t travel out, so the best way to escape is through helicopter, private helicopter to another state,” Boss continued.

The reason Tupac fled to New Mexico and has been residing on Navajo land ever since is because federal agents cannot enter tribal land without the permission from the tribal council.

“You could write a fiction story, but his is not fiction,” says Boss. “This is facts through certain people that I know.”

Boss claims his father knew Tupac’s mother from their involvement in the Black Panther party, while he personally has connections to rappers G-Money and Snoop Dogg, who collaborated with Shakur.

If that’s not enough to convince you, here’s another interview with Boss and the man who plays Tupac in 2Pac: The Great Escape from UMC, Richard Garcia.

More Tupac news and conspiracy theories…
• Statue Of Tupac Shakur Is Getting Roasted By Fans For How Much It Does Not Look Like Him
• Will Smith Reveals That He Was Extremely Jealous Of Jada Pinkett Smith’s Love For Tupac – ‘Huge Regret Of Mine’
• Suge Knight Said He Had Sex With Lisa Lopes While She Was With Andre Rison, ‘Left Eye’ Thought Tupac Was Her ‘Soulmate’
• Kim Kardashian Lied To Star In 1994 Tupac Music Video
• There Are Hip-Hop Fans Who Believe Playboi Carti Is A Reincarnation Of Tupac
• Suge Knight Jr. Addresses His Conspiracy Theory That Tupac Shakur Is Alive And Living In Malaysia
• Tupac Shakur’s Signed 1995 Prison I.D. Card Sets Record For Most Expensive Piece Of Rapper’s Memorabilia
• Tupac’s Breakup Love Letter To Madonna Officially About To Go Up For Auction, Expected To Fetch A Huge Price
• Former Death Row Security Head And Cop Says Las Vegas Police Purposely Tried To Not Solve Tupac’s Murder
• LAPD Detective Knows Who Killed Tupac And Says There Is No Conspiracy Theory To Shakur Or Biggie’s Deaths
• Conspiracy Theory Claims Tupac Shakur Didn’t Die In Shooting And Appeared In 2006 Music Video
• Conspiracy Theory Says Tupac Shakur Didn’t Die And The Proof Is In An Eye-Opening Interview With Sway
• Tupac Is Alive According To Conspiracy Theory With Updated Photo Of The Legendary Rapper