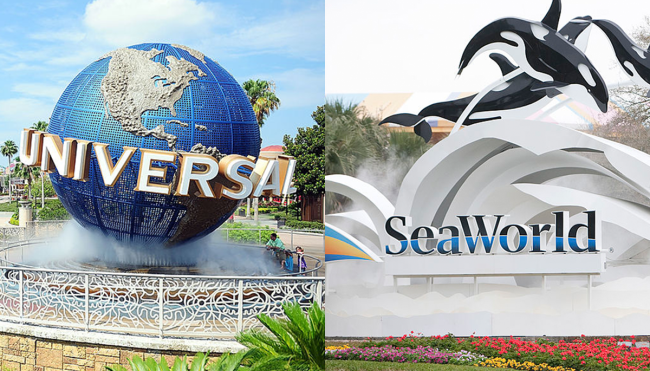 I imagine that basically anyone who’s ever walked inside a drinking establishment at some point in their life knows the phrase “top-shelf” refers to the pricey bottles of booze that are traditionally perched high above the bar; the premium whiskeys and tequilas with a flavor profile and price point that discourage most people from throwing them back in a single gulp.

In my experience, even the dingiest dive bar will have at least a couple of relatively nice (albeit dust-covered) bottles tucked away up top for customers who are feeling a bit fancy,  and you can normally get a pretty good read on what kind of watering hole you’ve walked into by taking a glance at the liquors that grace its highest tier.

As a result, I have to say I was fairly baffled when I stumbled across a picture that was taken somewhere within the confines of the Universal Orlando Resort at a bar that apparently decided Fireball and Southern Comfort deserve the Top-Shelf Treatment—which was especially puzzling when you consider the one below it is home to some Johnnie Walker Red and Glenlivet 12.

I guess it’s only appropriate that Fireball was responsible for sparking a heated exchange after the Universal Orlando Twitter account decided to chime in by encouraging its visitors to “live a little” by ordering themselves a glass of something that should arguably only be consumed as a shot.

It's a vacation. Live a little.

It did, however, stress that Fireball should be enjoyed in moderation while throwing a shot at SeaWorld for good measure.

Not TOO much. This isn't SeaWorld.

It’s safe to say SeaWorld did not take kindly to that slander, as it decided to fire back by pointing out it recently secured the incredibly prestigious USA Today’s 10 Best Readers’ Choice Award for the Top Amusement Park America has to offer.

You’re so right. @10Best recently said something about SeaWorld being a bit more “lively”.

SeaWorld appeared to have won that battle, but it apparently wasn’t ready to wage the war it sparked, as Universal fired back by mocking the theme park for the $2.7 million lien it was hit with last year for falling behind on payments related to the construction of its Ice Breaker roller coaster.

Maybe pay your team to come up with new material? 🤔

This paperweight would look good on your desk. Congrats. pic.twitter.com/Fk2OpH1Xat

Thank you for joining us for our latest installment of “Battle of the Brands.”